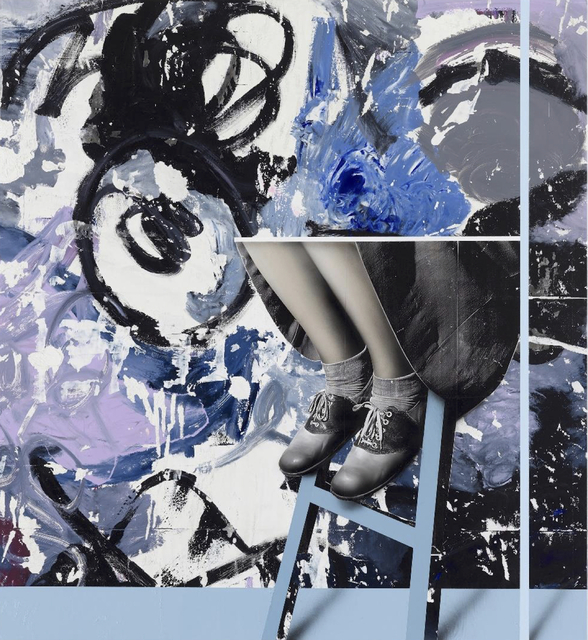 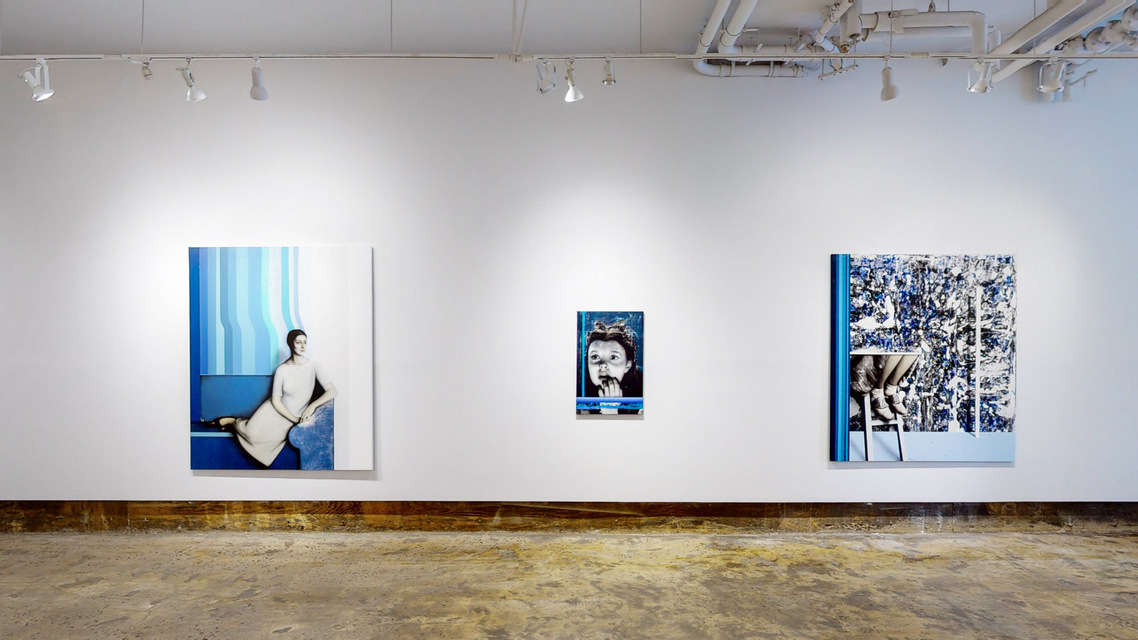 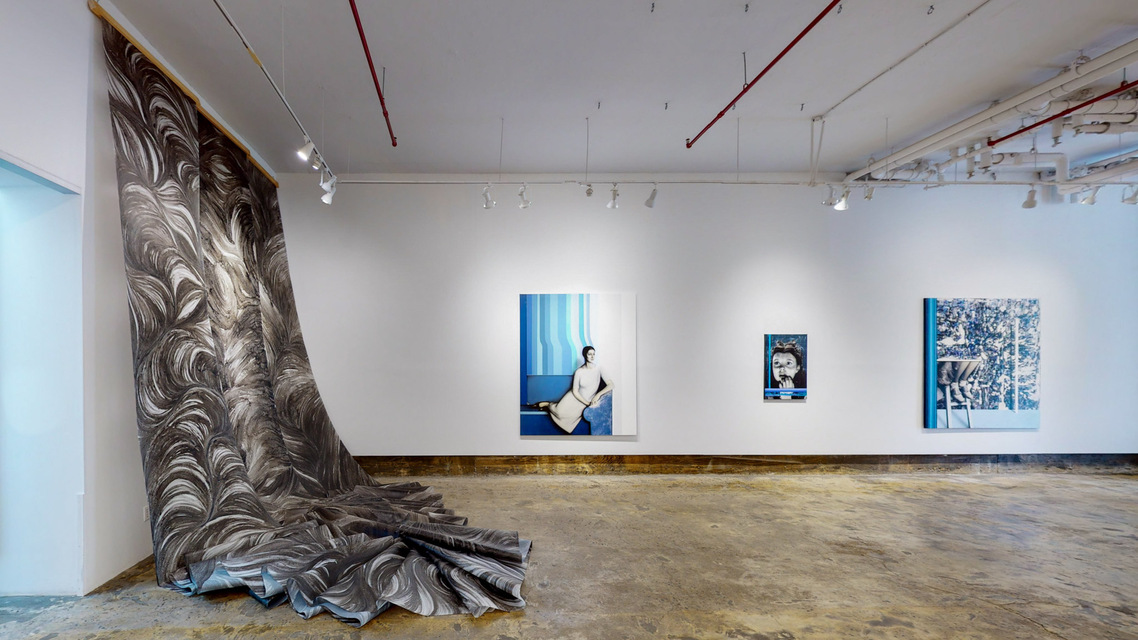 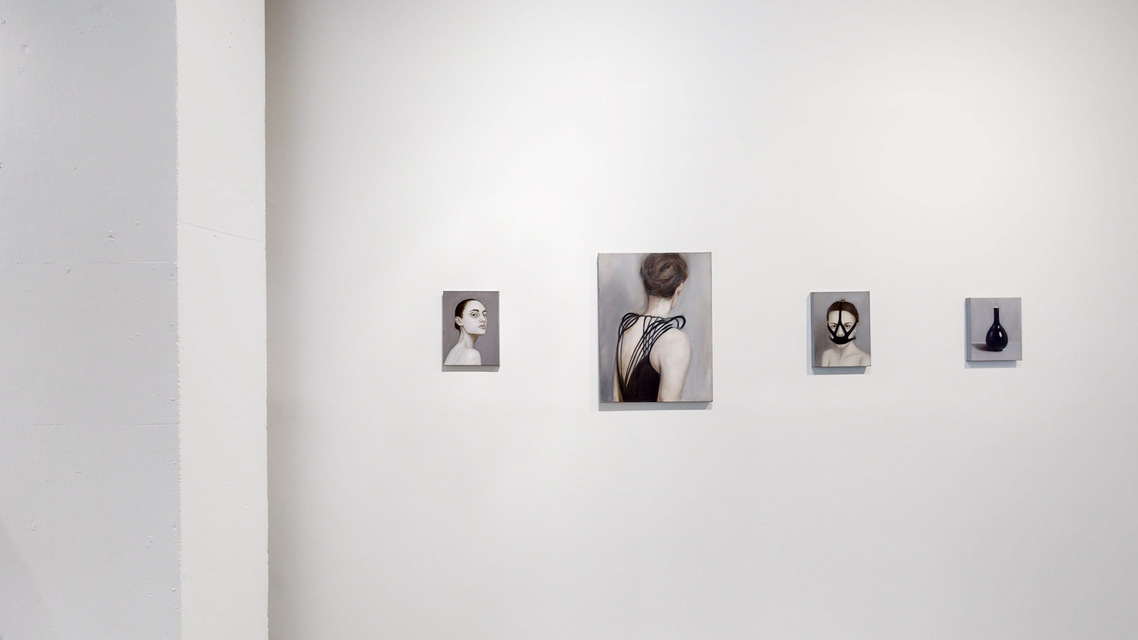 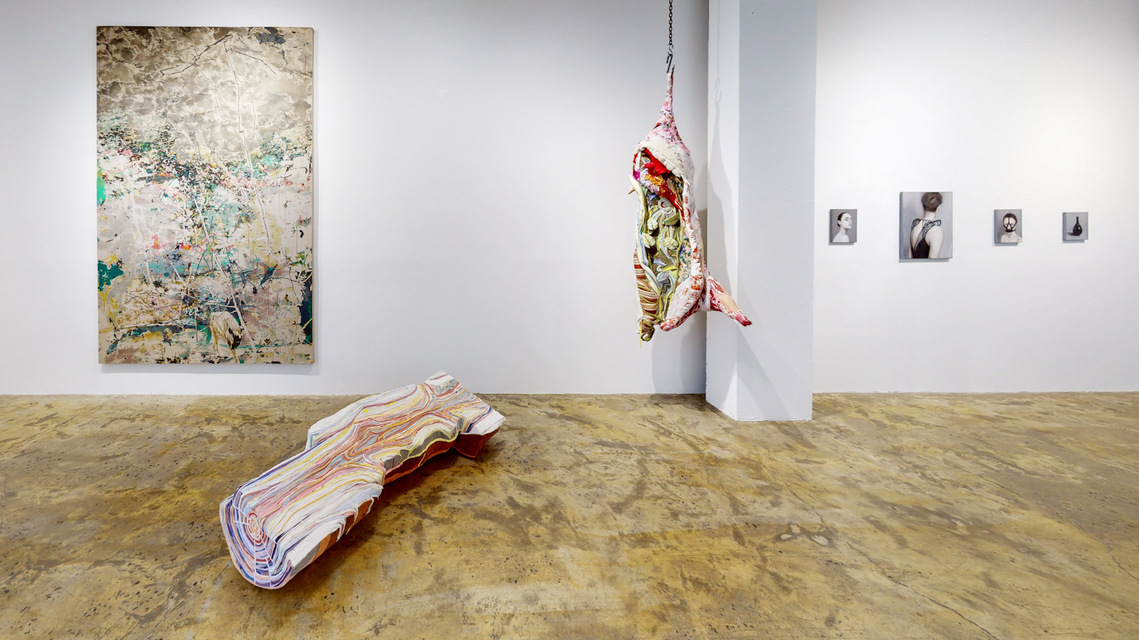 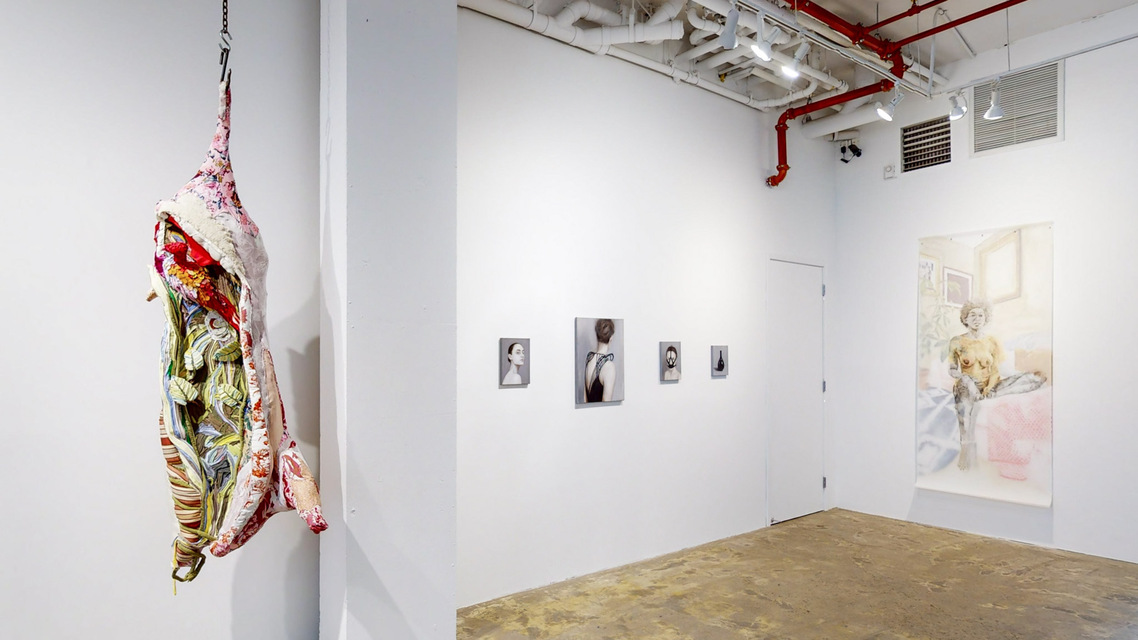 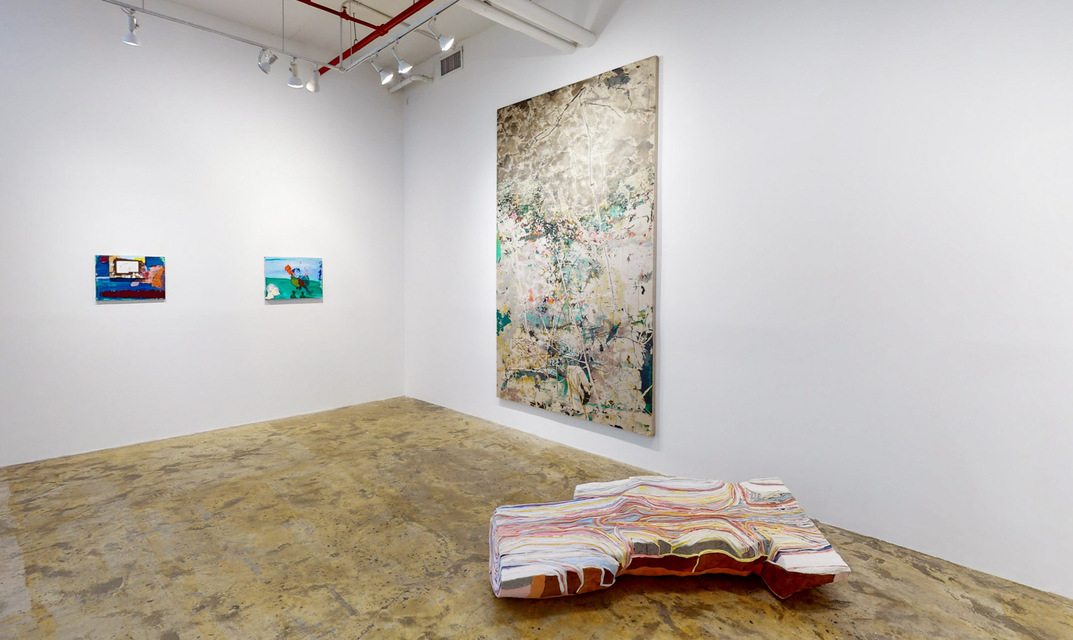 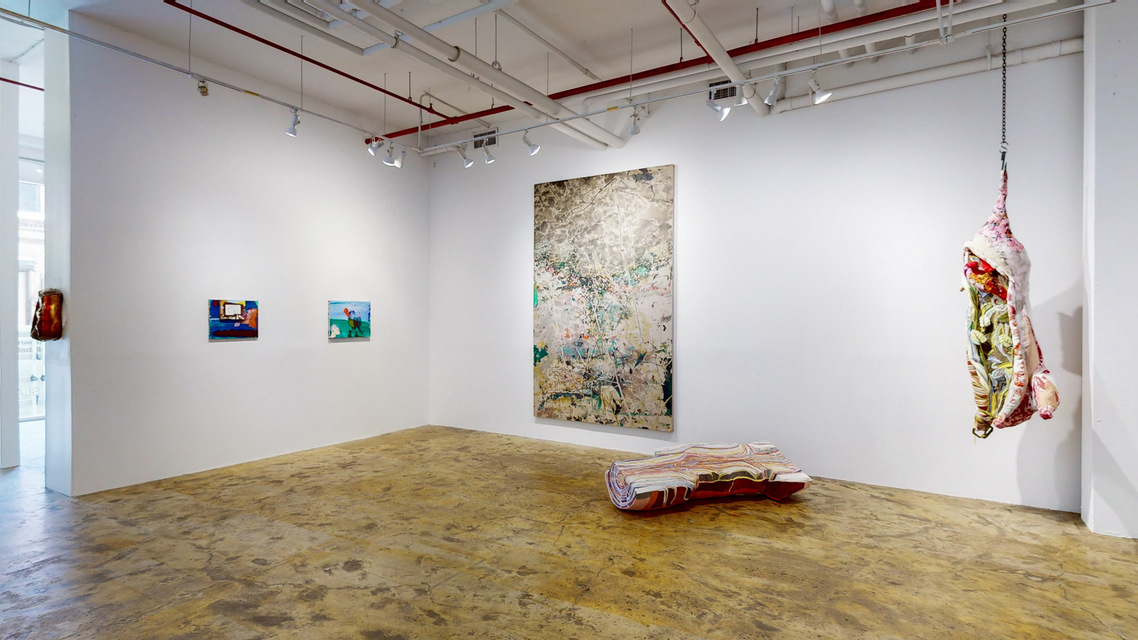 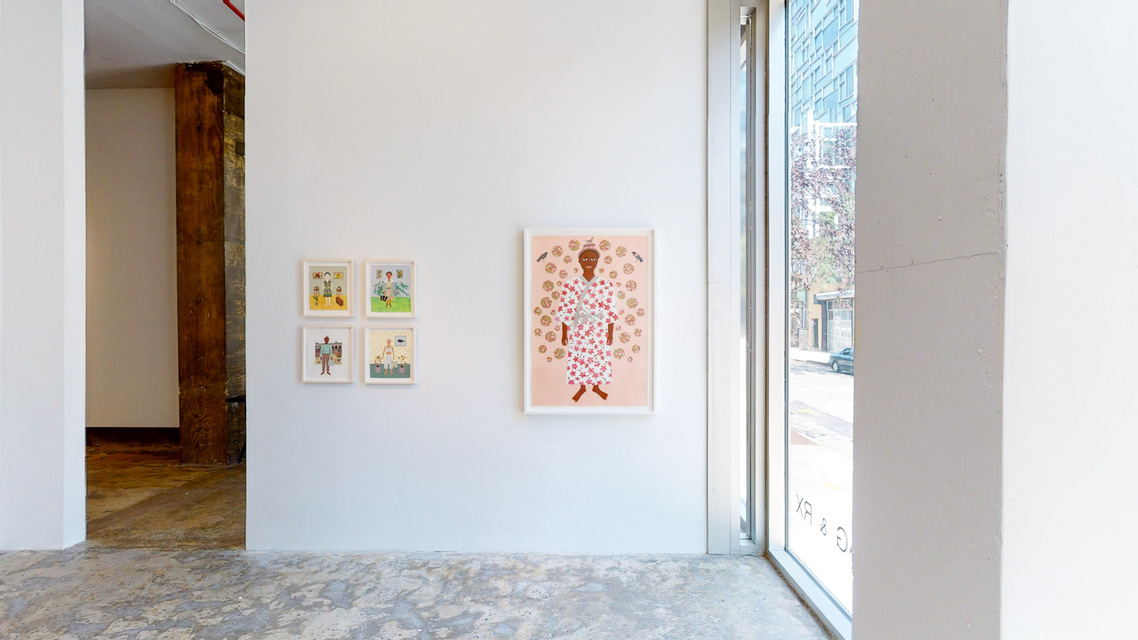 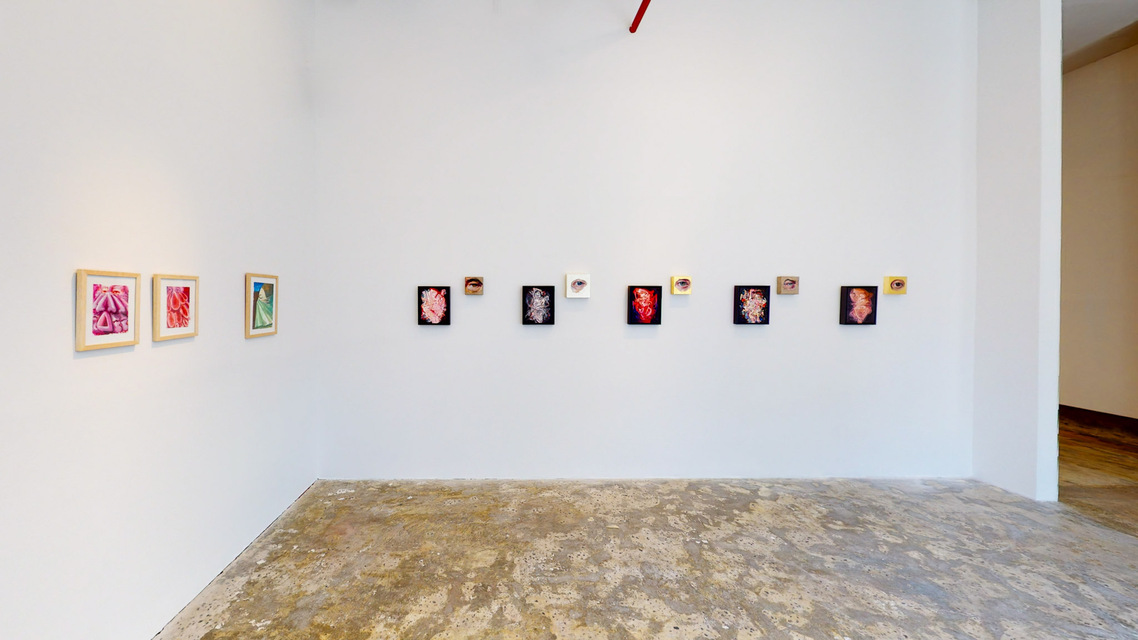 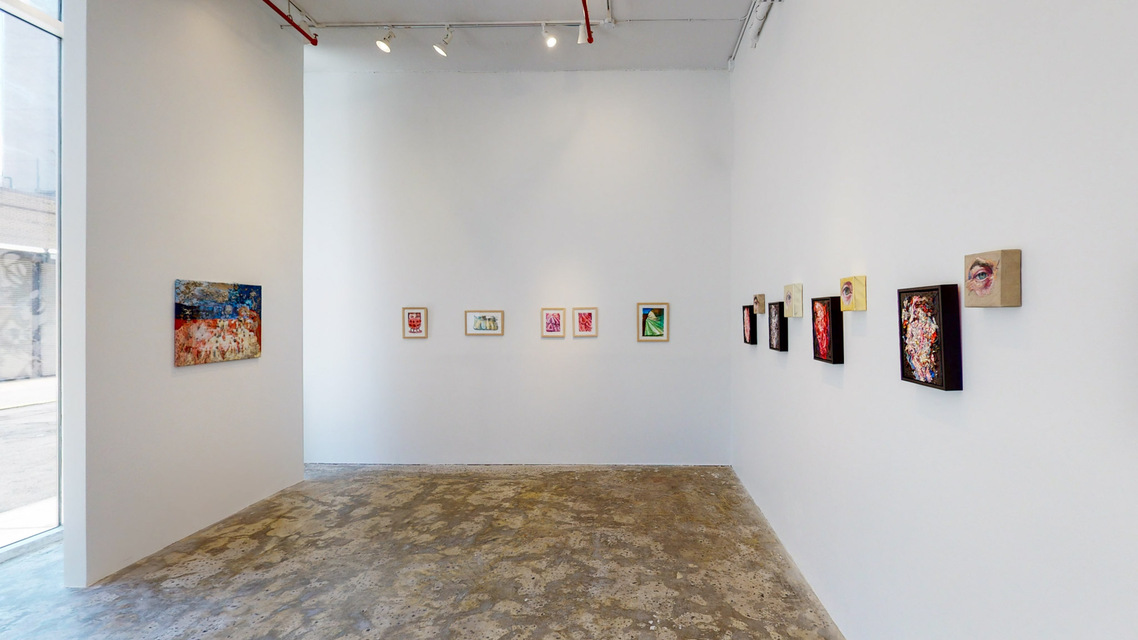 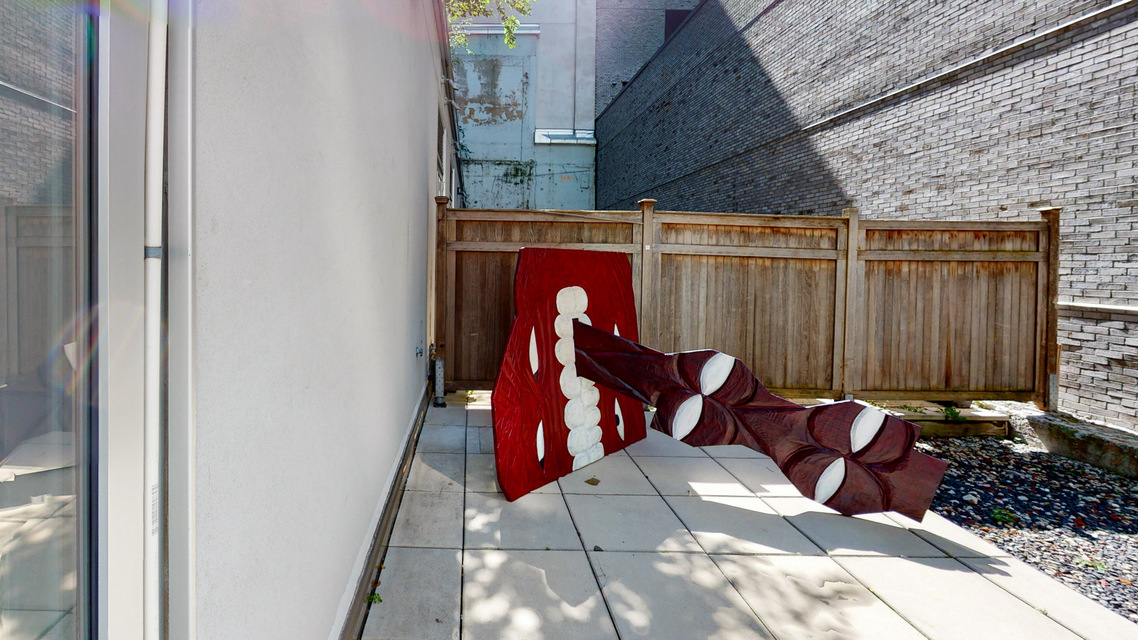 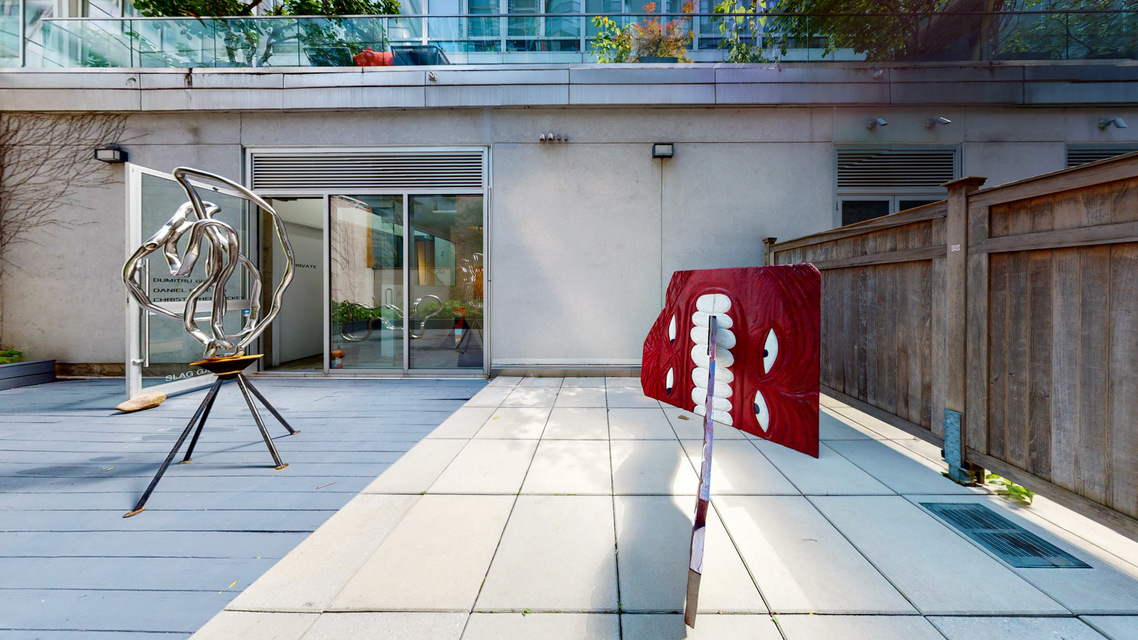 Bassel holds an MFA from Boston University and she studied drawing and painting at the Jerusalem Studio School in Israel. She is a faculty member in the Visual and Critical Studies Department at the School of Visual Arts in New York City and a resident artist in the Chashama Workspace Program in Sunset Park, Brooklyn. Bassel is represented by Slag Gallery, NYC and Galerie Thomas Fuchs in Stuttgart, Germany.

Fradkin is the recipient of numerous prestigious awards including a Pollock-Krasner Grant, an Adolph and Esther Gottlieb Foundation Grant, a Sharpe Foundation Space Grant, two Fellowships in Drawing/Works on Paper from the New York Foundation for the Arts, five Artist-in-Residence Grants from the New York Foundation for the Arts, an Artist-in-Residency at Altos de Chavon, an affiliation of Parsons School of Design in the Dominican Republic, a Solo Exhibition Grant from Artists Space and an Artist Grant from the Vermont Council for the Arts.

Fradkin currently lives on Staten Island. She has lived in rural Vermont and travelled extensively in Mexico, Guatemala, Italy, Greece, the Dominican Republic, Haiti, France, Turkey, Spain, Morocco, Jamaica, Venezuela which has had profound influence on her artistic viewpoint.

Fradkin has exhibited widely in the US and Europe at venues including the Smithsonian National Portrait Gallery, the American Academy in Rome, MoMA/PS 1, The Queens Museum, the Brooklyn Museum, The Weatherspoon Art Museum, The Holter Museum of Art, The Bellarmine Museum, The Nicolaysen Museum, The Brattleboro Museum, The Park Avenue Armory, The Alternative Museum and many other national and international venues.

Sandro Kopp was born in 1978 in Heidelberg, Germany, and is of New Zealand and German descent.  Lived and studied in Wellington, New Zealand in his early twenties.  Since 2006 based in the Highlands of Scotland.

His work is in many noteworthy collections worldwide and has been shown - among many others- at the National Portrait Galleries of England and Scotland, as well as Lehmann Maupin, New York and Victoria Miro, London, Palazzo Grimani Museum, Venice and Sammlung Friedrichshof, Vienna.

Tamara Kostianovsky is a Latinx artist whose work addresses themes including the environment, violence and consumer culture, often employing discarded clothing to create visceral and intricate sculptures and installations. Her work has been exhibited at venues such as El Museo del Barrio NY; the Jewish Museum NY; Nevada Museum of Art, NV, and many others, receiving distinguished awards such as a Guggenheim Fellowship and grants from New York Foundation for the Arts and from the Pollock-Krasner Foundation. Her work has been reviewed in the New York Times, Boston Globe, Village Voice, Marie Claire, La Repubblica, El Diario New York, Colossal, and Hyperallergic, among others. Residencies include Yaddo, Wave Hill Gardens, LMCC, Socrates Sculpture Park, and Franconia Sculpture Park. Kostianovsky received a BFA from the National School of Fine Arts, Buenos Aires, Argentina, and an MFA from the Pennsylvania Academy of the Fine Arts, Philadelphia.  Tamara Kostianovsky is represented by Slag Gallery, NYC.

Currently, Kostianovsky has a solo exhibition at Fuller Craft Museum and her work is featured at Museé de Textile de Cholet, France and at the Wassaic Project.  She has forthcoming exhibitions at Smack Mellon, Ogden Contemporary Arts, Galerie RX, Paris and Les Fransciscaines Centre D'Art, France.

Yumiko Ono completed her BA in Kyoto Seika University (Japan)  in oil painting  in 2005. Since her BA, Ono studied in Hungarian University of Fine Arts (Hungary) , in Bezalel Academy of Arts and Design (Israel )  and studied in Academy of Fine Arts in Prague (Czech Republic) and completed an MA  in  intermedia in Academy of Arts, Architecture and Design (Czech Republic)in intermedia  and second MA honors in ceramics in Stieglitz State Academy of Arts and Design (Russia). All of which were funded by the governments of each country as well as the Ministry of Culture of Japan.  Additionally, Ono has participated in residency programs world widely such as John Michael Kohler Arts Center(WI), MASS MoCA (MA), ISCP (NY), Retreat (NY), Taipei Artist Village (Taiwan), Shigaraki Ceramic Cultural Park (Japan), Paradise AIR (Japan), Gyongi Creation Center (South Korea), St. Petersburg Art Residency (Russia), Meet Factory  (Czech Republic) and At Home Gallery Residency (Slovakia). Ono was also selected as a finalist of CAF award.

Marius Ritiu holds an MFA from the Royal Academy of Fine Arts Antwerp, Belgium, as well as an MFA in Classical Sculpture from the Art and Design University of Cluj, Romania. He left Romania in 2010 together with his colleague and friend,Cristian Bors. Subsequently, Bors & Ritiu worked as an artist duo from 2010 until 2017. Marius Ritiu has shown in numerous international group and solo shows including, the Bucharest Biennale; Middelheim Museum, Antwerp, BE; Independent Art Fair, Brussels, BE; Volta, Basel, CH; Open Source, New York; cutlog Art Fair in Paris and New York; the Museum of Contemporary Art, Bucharest, RO. He has also been awarded scholarships and residencies including the ARTE/Cutlog Prize; the Verbeke Foundation Residency, BE; and most recently, the Kunsten Erfgoed Grant for the ISCP. He is currently an artist-in-residence at the International Studio & Curatorial Program in New York (ISCP). He lives and works in Antwerp, Belgium. Marius Ritiu’s oeuvre is personal yet universal, intimate yet foreign, disparate yet connected, historical yet fictitious, global yet local. His work is contradictory – as creative work so often is – steeped in themes of travel, heritage, cultural origin, migration, and space. As a Romanian artist whose own migration story to Western Europe has informed and anchored the topics in his work, Ritiu seeks ways to express the universal humane through the personal or particular, the familiar through the alien, the planetary through the local.

Currently her work is shown at The Maine Jewish Museum as part of Skowhegan School of Painting & Sculpture curated by Juliet Karelsen. Safran-Hon has two forthcoming solo shows at Galerie RX, Paris and at Bonisson Art Centre, France.

Mircea Suciu works with different materials such as acrylic, oil and often combines them with monoprint techniques. For a long time his works were based on images he found in newspapers, magazines and other media. The themes he choses are mainly socio-political and psychological orientated.The artist has a particular interest in the way the individual appropriates the behaviour of the mass during manifestations and therefore loses his own identity. Recently elements, such as props, curtains, covered objects and people struggling with heavy entities, like big balloons have appeared in his new works.

For Mircea Suciu the process is at least equally important as the final image. He likes to work in series in order to exhaust the imagery and to transform them in a way that the viewer gets different perspectives on a certain topic. Since last year he started making his own photographs so that he can combine different realities and visuals in one work. Despite a complex and layered creation process the surface of each work has a unified quality. Suciu envisions works that are difficult to define in time and space. By using a staged process of creation, destruction and restoration, his surfaces seem to have suffered and give the impression of embodying an intense history. Painting is a loaded and heavy medium that Mircea Suciu wants to honour. This implicates a dialogue with the past but also with the future, because as an artist he searches for new areas in painting by pushing limits and possibilities and looking for a position of his own in a contemporary world filled with new media.

In 2014 a large drawing installation was on view at the Gwangju Biennial in South Korea, which consisted of charcoal drawings with monoprints. He also participated in the 4th Prague Biennial, 11th Istanbul Biennial and 16th Vilnius Painting Triennial. In 2017 several of his works were on view at the Timisoara biennial.

Paul Joseph Vogeler (b. 1982) is an artist living and working in New York and Berlin. He primarily works in painting, drawing, & printmaking. Paul studied architecture and design before completing his BFA at School of Visual Arts in 2009, and his MFA at Hunter College in 2021. He has shown internationally in New York, Berlin, Zȗrich, Karlsruhe, Budapest, and Detroit. He is the author of Die Sterne Über Mir, a tarot deck created from 78 linoleum block prints he carved himself.

“My practice is the constant materialization of reflecting upon the human experience and mortality. It is an ongoing search for the physical symbols that reveal an eternal spiritual realm and mirror the feeling of being human: whether it be the human body, bones and artifacts, landscapes and waterfowl, sexuality and Tarot, or meditations on isolation and death. I seek to express the trauma of our human actuality, both the fallen and the Divine.”

Alida (Allie) Wilkinson was born and raised in New York City and received a B.A. in Visual Arts from Bowdoin College. Her works have been exhibited in galleries across the United States, notably at Pen + Brush Gallery, Deanna Evans Projects, and Corridor Gallery. She has been an artist in residence at the Byrdcliffe Residency (NY, 2021) and the 77Art Residency (VT, 2019). Her ink paintings are held in private collections in the United States, France, Spain, Switzerland, and the United Kingdom. She currently lives and works in Brooklyn.

Alida Wilkinson uses liquid ink and water to render both figurative and abstract subjects on translucent dura-lar. Ink dries on the surface of dura-lar, and water evaporates, leaving an imprint of organic, chaotic forms. This unpredictable medium reinforces the themes of human volatility, emotionality, and vulnerability that are central to Wilkinson’s work. Dura-lar, a polyester film, is translucent, milky, and skin-like, properties that allow for layering. Wilkinson expands the possibilities of this surface, intended to be two dimensional, by designing her works as translucent objects that inhabit space rather than live on the wall. Her installations incorporate ambient light and the air currents created by passing bodies, which endow the work with a quality of breath.

Dumitru Gorzo received a BA and a Post-Graduate Diploma in Advanced Studies in Painting from the University of Arts in Bucharest, Romania. He has had solo shows in museums such as MNAC (Bucharest), NJ MoCA (New Jersey), Brukental Art Museum (Sibiu), Kunstverein Viernheim, as well as in art galleries and not-for-profit art institutions across the US and Europe.  He has participated in numerous group exhibitions at prestigious art venues such as the Istanbul Biennial, Marina Abramović Institute (San Francisco), Kunsthalle Budapest (Mucsarnok), MODEM Modern and Contemporary Art Center (Debrecen), and Museum Küppersmühle (Duisburg), Boulder MoCA, and Museum of Recent Art, (Bucharest,) to name just a few. Gorzo lives and works in Brooklyn, NY.