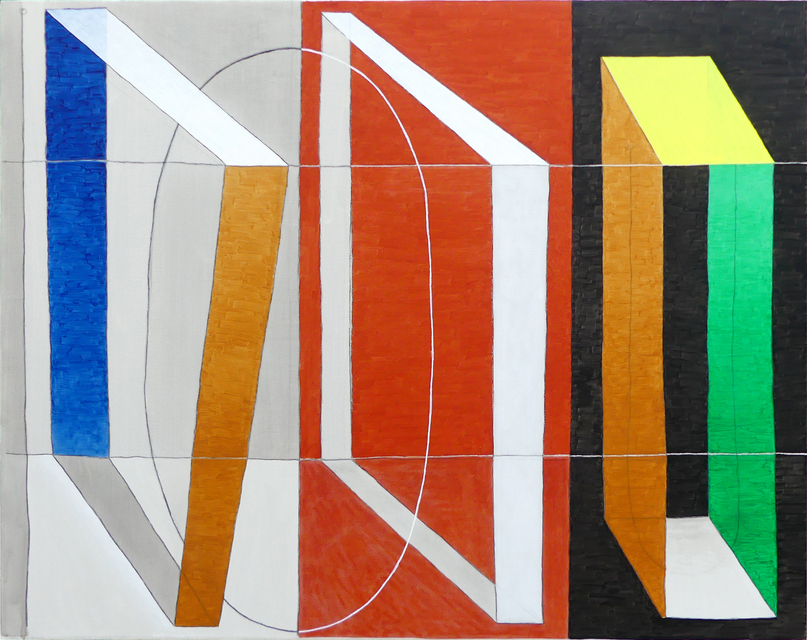 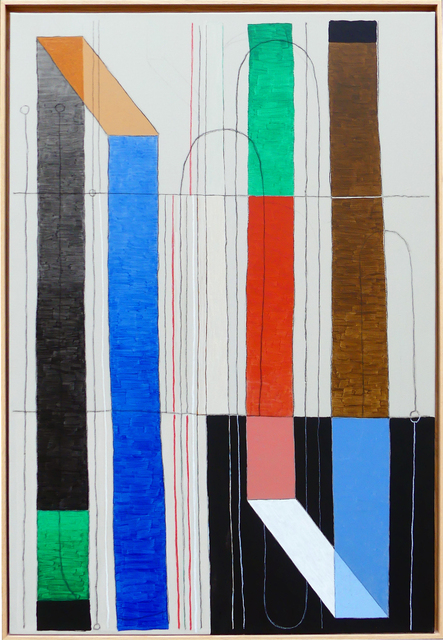 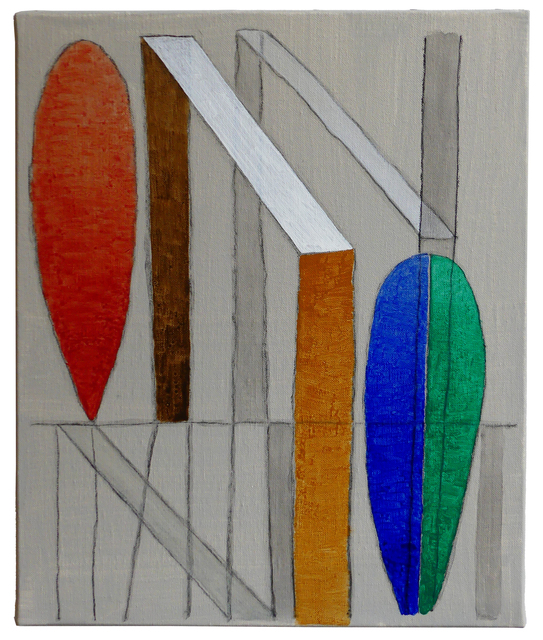 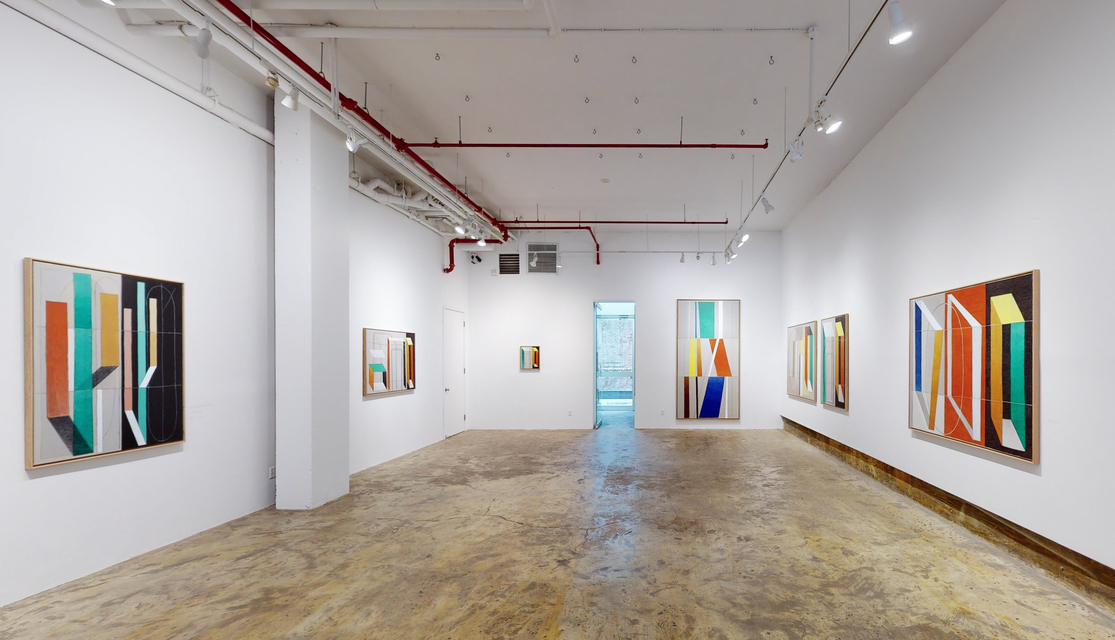 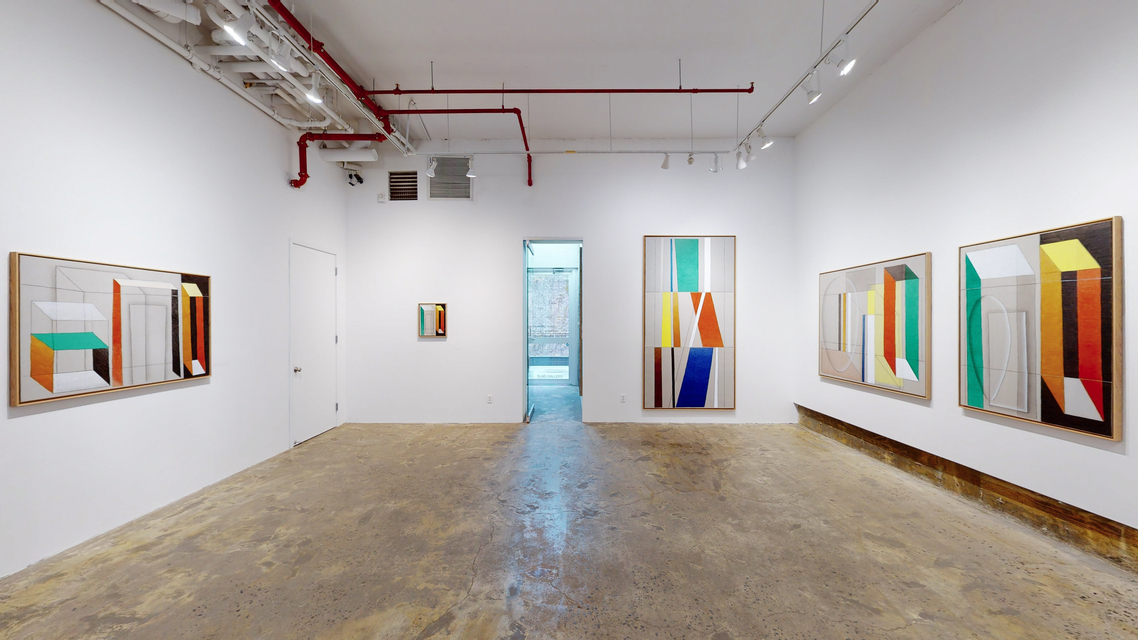 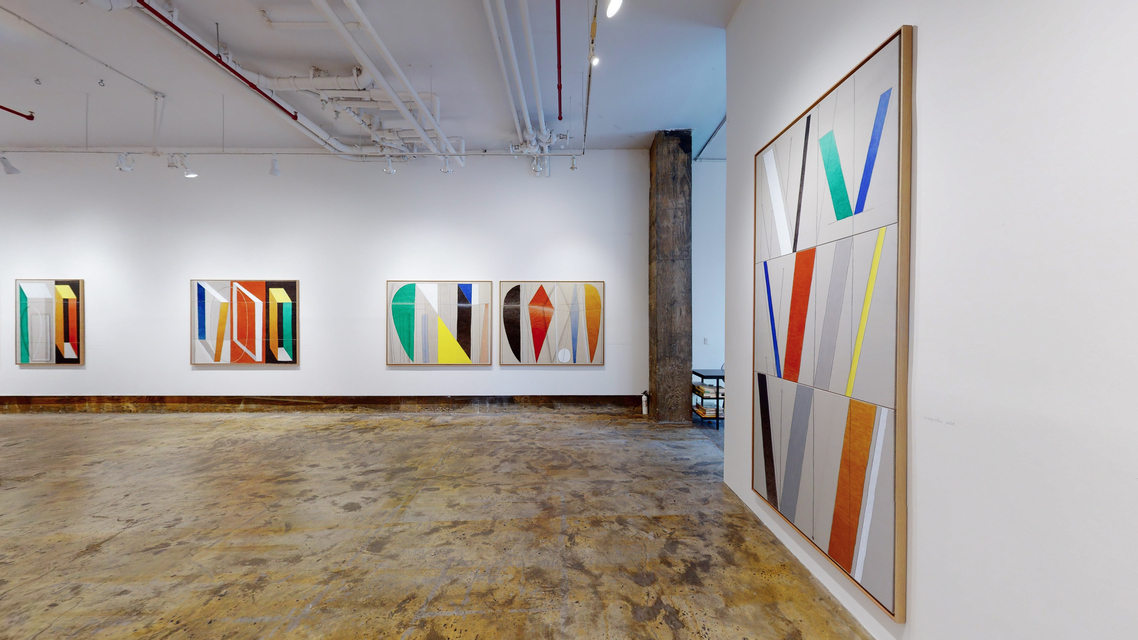 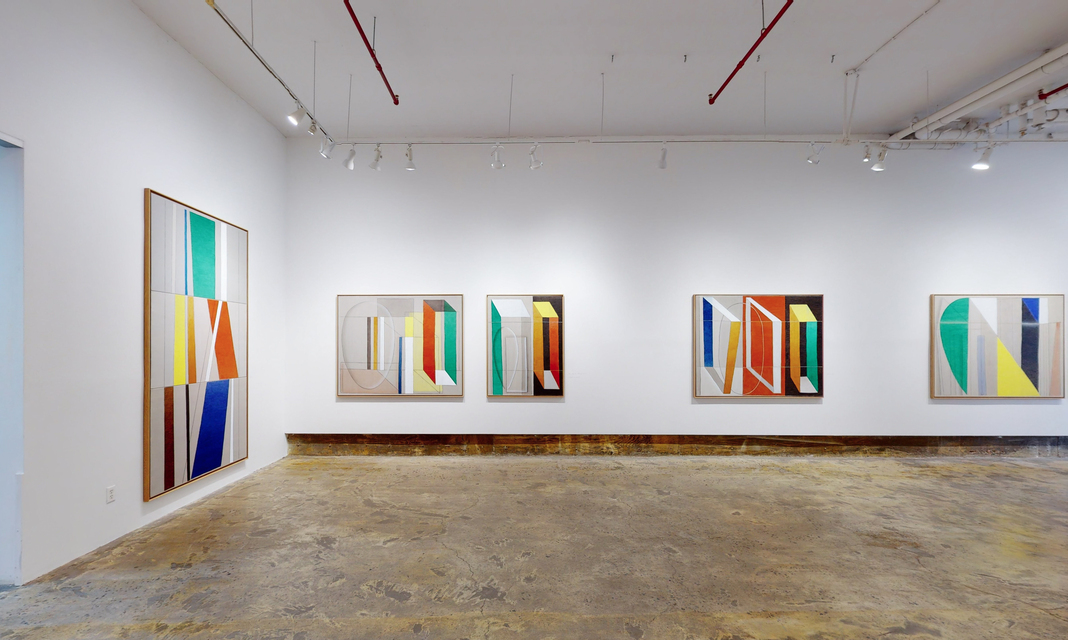 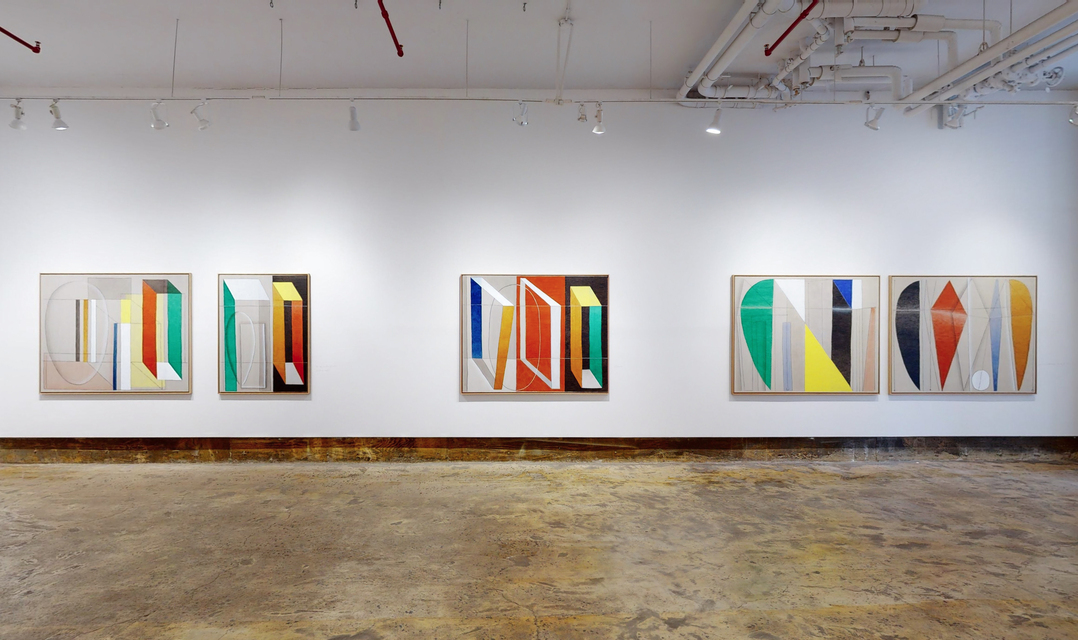 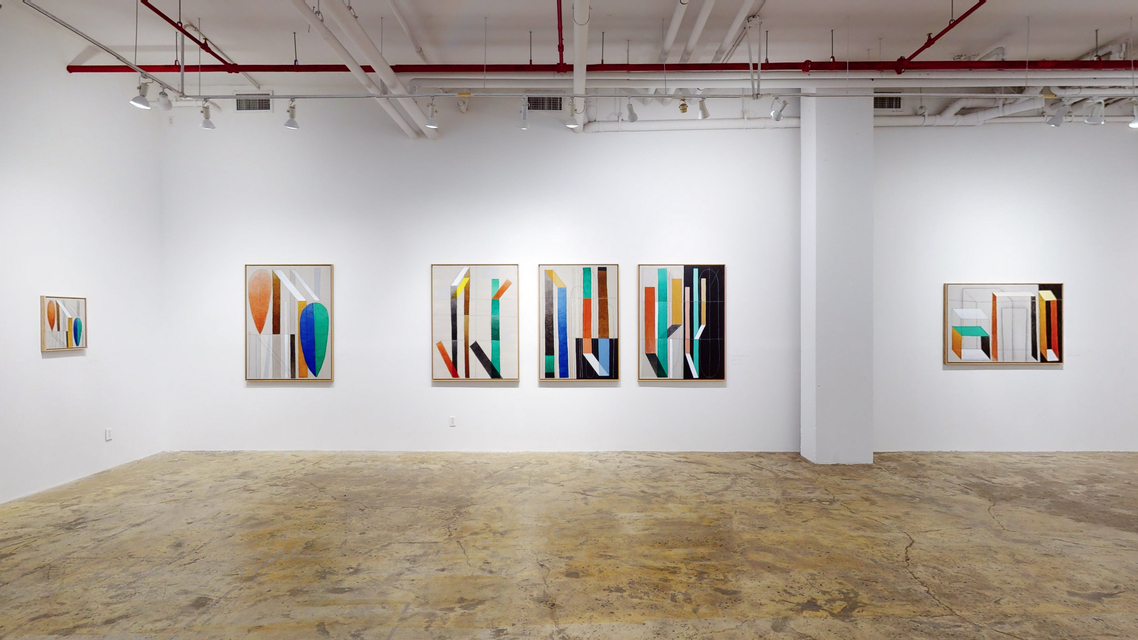 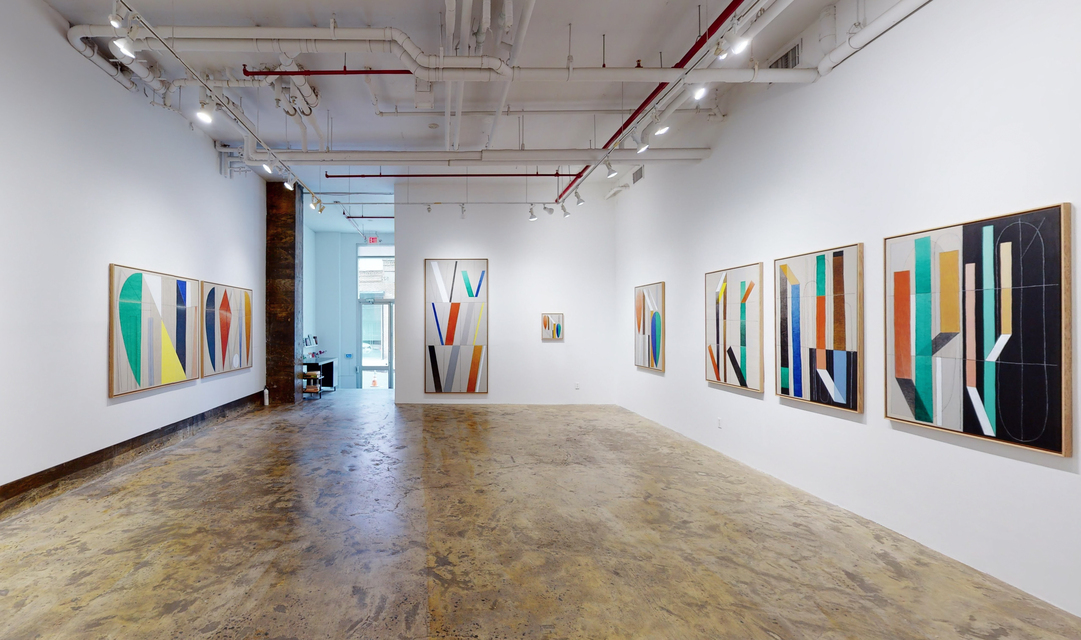 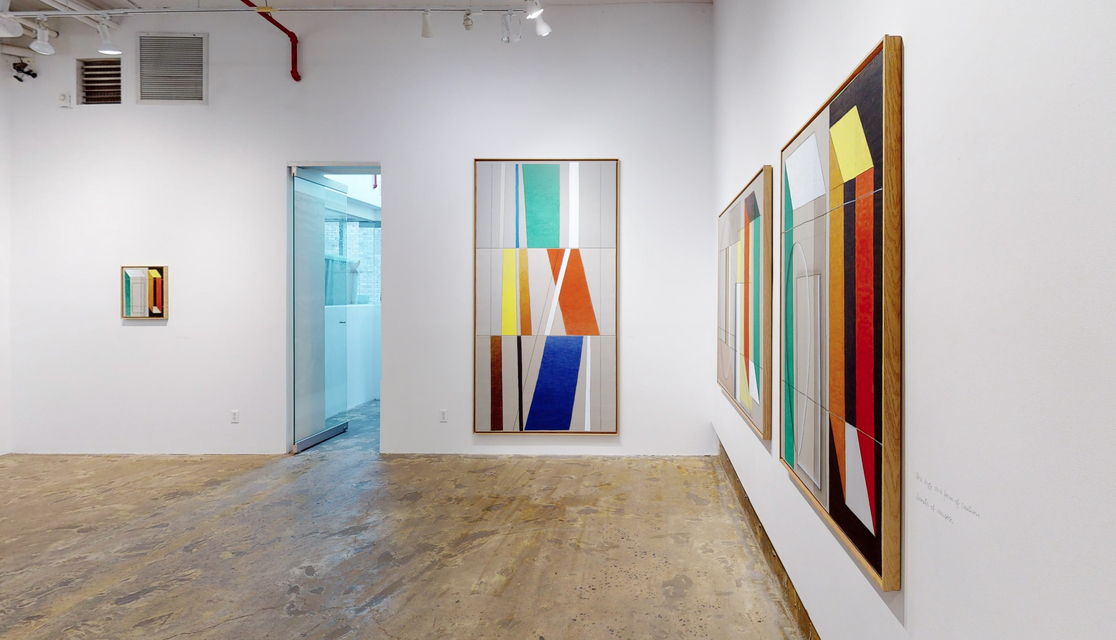 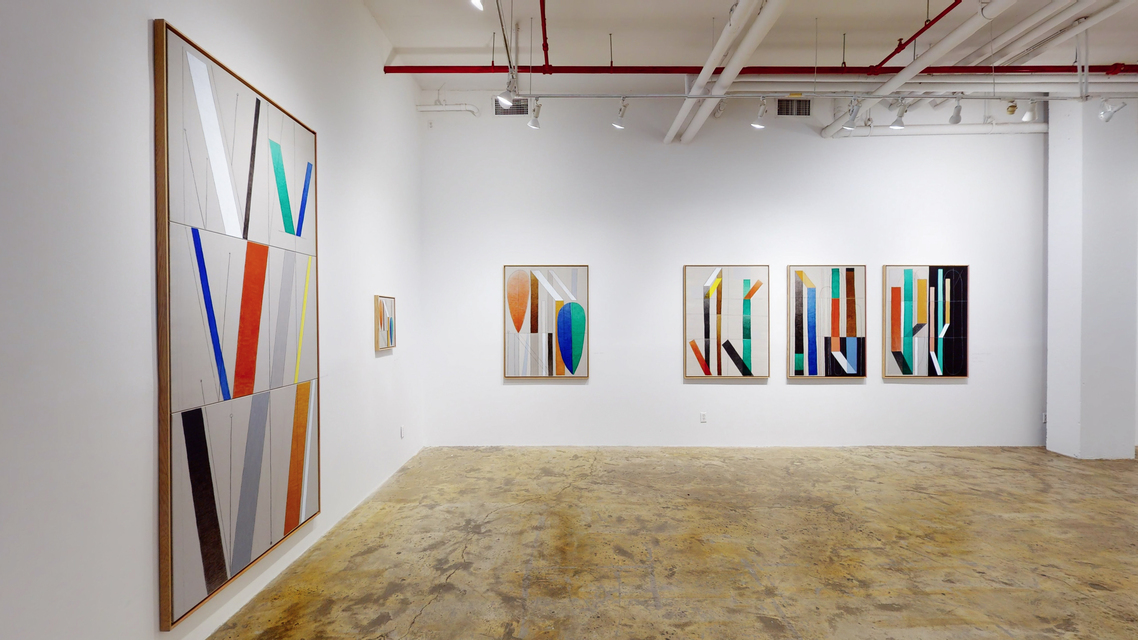 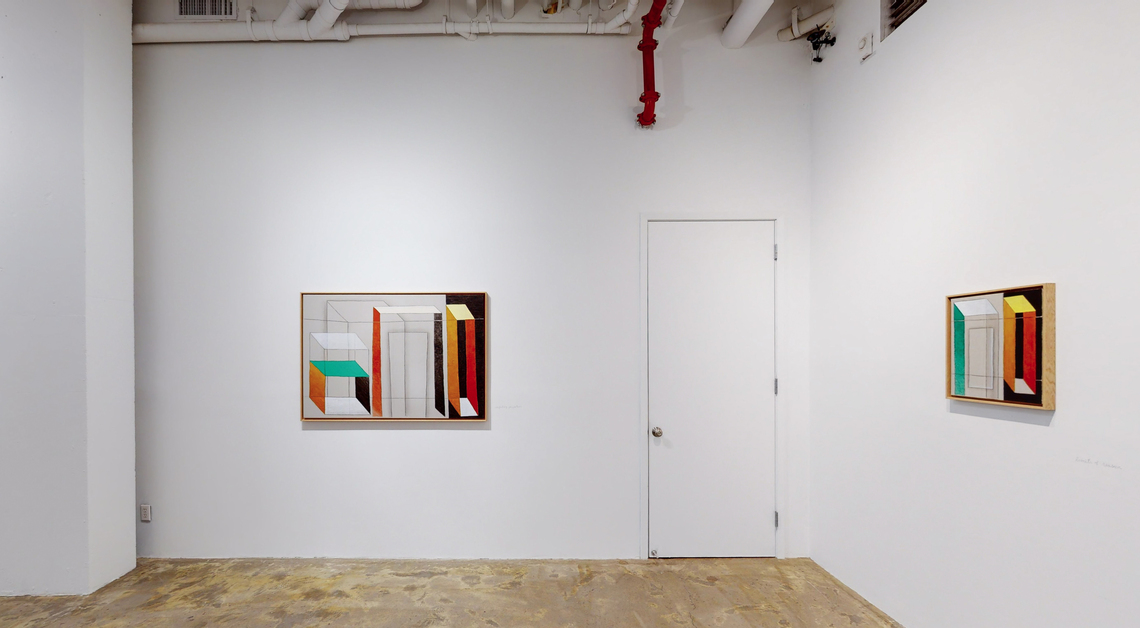 Slag & RX Galleries are pleased to present Conflicting Perspectives, a series of paintings by Júlio Villani. This will be Villani's first solo show in New York City.
The colors in the works created for this solo presentation, are more vivid and frank than those to which the artist had accustomed us in recent years – but the backbone of his structures still rests on the lines, these lines of which Villani says that if we were to remove even one, the whole building could tumble.

This inherent, sought-after instability of geometrical forms is undoubtedly the mark of a neo-concrete heritage, into which the artist playfully infuses a dose of chance. In this particular point, he joins the Franco-Hungarian artist Vera Molnar, who enjoyed injecting "1% of disorder" into her multiplication of squares to give them a sensitive, moving, and lively form.

Villani's compositions are all the more lively as his resolutely imprecise lines have a breathing quality and seem to merge into the junctions of the planes. They are gradually drawn, erased, and redrawn in charcoal on the canvas. The gesso primer – which confers on the surface a matt aspect and great sensitivity to the slightest intervention – keeps trace of every step of the construction and becomes a palimpsest that color does not try to hide. The process – the hand movements, the artist's hesitations – stands its ground, real and visible, in the finished work.

The sensitive vein also shows through Villani's particular use of perspective, which reappears in his work after years of exploring flat tints rather than volume.

As with his line, his perspective is neither strict nor rigorous – quite the contrary: it is at the crossroads of the Western conception, which fixes a vanishing point aiming towards infinity, and the Eastern perspective, which brings everything to a unique, flattened out front plan. "A conflict between vision rays and perspectives that I find symptomatic of the moment I live – maybe we all do? – nowadays ... "he confides, offering in a glimpse an explanation as to the choice of the title of the exhibition.

Indeed, we could not present this ensemble of works without mentioning the titles: Fixed Idea, Piano Lesson, Limits of Reason, The Egg as an Act of Creation, Conflicting Perspectives, to mention a few. They intrigue and are not devoid of humor, a true character trait of the artist, who – worthy heir of the L'OuLiPo [1] tradition – likes to play with words. When a title does not come to mind spontaneously, in front of a canvas, he draws from a

notebook in which he collects all kinds of words or sentences, searching for the seemly correspondence. Readymade titles in a way, composed with "found-words."

Frequently with Villani, behind a cue lurks another. From the revamping of Duchamp's lessons for literary use to the organic linearised by merging two planes advocated by Lygia Clark, it all happens as if the artist were constantly rewinding and unfolding his artistic heritage in search of its original thrust. It is possible that the Franco- Brazilian Villani, who readily claims his double origin, refuses to choose between the concrete and the abstraction. He thus presents us with a gentle confrontation between geometry and sensitivity in which the pictorial elements have their reality – and the perspective, its rules.

About the Artist, Júlio Villani

Born in Marilia, Brazil, in 1956, Júlio Villani lives and works in São Paulo and Paris. He settled in Paris during the ’80s after studying fine arts at FAAP, São Paulo, Watford School of Arts, London, and ESNBA, Paris.

Reflecting his double path, the list of his exhibitions crisscrosses over the Atlantic time and again: MAM and the Zadkine Museum, Paris, the Pinacoteca and MAM, São Paulo, the Reina Sofia Museum, Madrid, the Ludwig Foundation, Aachen, Oscar Niemeyer Museum, Curitiba.

His work, prolix and multifaceted (painting, embroidered drawings, video, collages, assemblages), is built in an infinity of meta forms pertaining to themes revolving around displacement, instability, and the infinite and borderless worlds offered by life and fantasy. Alternately adopting geometry or the tools of childhood, nourished by references, the artist is constantly on the lookout for the poetry lurking in the heart of the most trivial remains, for the unforeseen particle concealed in the thousand-times-seen: daily objects and reverie stand for Villani as the two sides of the same reality, much like the obverse and reverse of an embroidery.

It is not surprising that he has retained this technique to produce a monumental, site-specific project at the Thoronet Abbey in 2019, made at the invitation of the Palais de Tokyo.

[1] Ouvroir de littérature potentielle (Workshop of potential literature) is a gathering of writers (and some mathematicians) started by, amongst others, Raymond Queneau. Loose members included Georges Perec, Italo Calvino...