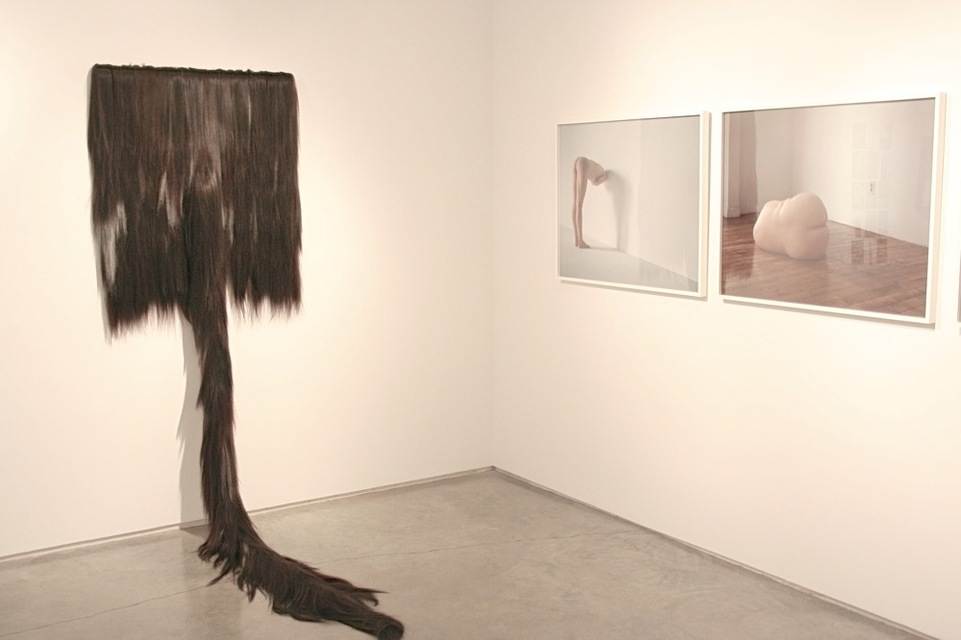 Art, by definition, is about looking, watching—and sometimes being voyeuristic. Taking that as a point of departure, “Turn On” investigates the power of art as being intellectually stimulating while simultaneously being sexually titillating. For some people, the exhibition may be a total mental turn on—a mind fuck—and others may be physically aroused by what they feel or see. Still others may be repelled and simply turned off. In any case, viewers will be given an opportunity to learn about the relationship of their own sexual psyche to the pieces in the show.

Grimanesa Amoros is an interdisciplinary artist with interests in history, scientific research and critical theory. She often makes use of sculpture, video, lighting and sound to create works that illuminate our notions of personal identity and community. Amoros’s sculpture in “Turn On” was inspired by the Mochica culture of Peru.
In his subtle drawings, Jarrod Beck captures his models’ body movements, inviting audiences to follow his lines—floating or woven into one another on white paper—and to imagine and create their own narratives. Beck’s suggestive works have residues of the intimate bonds that an artist forms with his subject.
Heather Benjamin participates in her first art gallery show with a sex zine titled Sad Sex 2. Benjamin’s cartoons, uncomfortably erotic and awkwardly funny, shows men and women having sex in a variety of positions without taking the least bit of enjoyment.
Michael Bilsborough ’s works shows identical, whirling figures in orgies amid dense grids, high-contrast lines, elusive surfaces and fragmented spaces. The artist’s complex and intricate drawings may excite the viewer, causing a sensual experience that he calls “retinal buzz.”
Artist, shaman and living legend AA Bronson’s career spans 40 years, 26 of them in General Idea. In his “Documenta Sex” text (written for “The next Documenta should be curated by an artist” project, organized by e-flux), Bronson proposes a playful manifesto about how a show about sex could and should be presented. For “Turn On,” Bronson turns the text into a form of zine, inviting the viewers to become part of his mini “Sex Documenta” by supplying their own centerfold.
Donnie & Travis, working in collaboration, create photo-based figurative works on silk. Through mechanical and handmade processes, their use of delicate and sensual materials reinforce and give a substantial realm to their ethereal subjects.
At first glance, because of their technique, lighting and color, TM Davy’s paintings look as if they are by an old master. On closer examination, one realizes they are portraits of love and passion by a new master whose name we will hear much more in the near future.
Bill Durgin ’s complex photographs feature undulating arrangements of flesh, abstracted forms lacking appendages and hair; their physical structure becomes not just a shell but also a moving sculpture of skin, muscle, fat and bone. Achieved through contortion and camera perspective, the uncanny figures convey the body as both abject and marvelous.
Lesley Maia Horowitz photographs abandoned factories in her hometown of Buffalo, New York. She documents the decay and loneliness of once spectacular industrial buildings, reflecting life around them. Her photographs in “Turn On” combine their history with their still-existing masculinity through non sequiturs of factory idiom, graffiti and tattered pornographic centerfolds left behind.
With a strong hip-hop influence, in his “Wigger” series (a term originally derived from “white nigger” and now referring to a large suburban youth culture) Brian Kenny explores sexual, racial and cultural identities. With Slava Mogutin, Kenny is also part of SUPERM; they have been collaborating since 2004, creating video, sculptures, paintings, collages and installations.
Kristian Kozul transforms banal objects into outrageous reliquary by using obsessively crafted ornaments, often seemingly at odds with the objects’ original function. His works are deeply inspired by European and American folk culture and art. The piece in “Turn On” is a shrine for famous porn star Jenna Jameson, giving her her due among other pop culture icons in U.S. who Kozul sometimes uses as subjects.
In her works, Fabienne Lasserre approaches themes of otherness and difference through elements from science fiction, mythology and fantasy. In “Untitled (Hair Painting, Brown),” featured in “Turn On,” she presents a feminine and anthropomorphic work that is also extremely sublime and erotic.
Slava Mogutin is well-known for his frankly sexual photographs, that are commentaries on present-day economic and political realities. In his “Stock Boyz” collages, Mogutin combines nude male figures from Eastern European porn sites with stock market charts from The New York Times. Originally a statement on the commodification of youth in our consumer society, the works have taken on a second meaning since the recent economic crisis.
In her “Me Into You” photograph series, Keren Moscovitch delves into the private spaces of a sexually interwoven community, where she becomes a participant. Her work investigates how intimacy and sensuality manifest in openly nonmonogamous relationships.
Working in photography and video, Carlos Motta generally uses strategies from documentary film, journalism and sociology to engage and discuss specific political events. In this opportunity, Motta responded to the quest of the curator of “Turn On” to include artists whose works’ content is not about sex by creating a special-edition of 5 t-shirts. Combining appropriated photographs from gay S&M sex with direct affirmations about "queerness," Motta attempted to re-think common assumptions about gay sexuality.
In his first gallery show, Metehan Özcan presents photographs that follow traces of daily life; they reveal the alienation of people and their surroundings, questioning space and existence. In his “Remote” series, Özcan’s own late-night cruising through the city examines how ordinary spaces became sexualized.