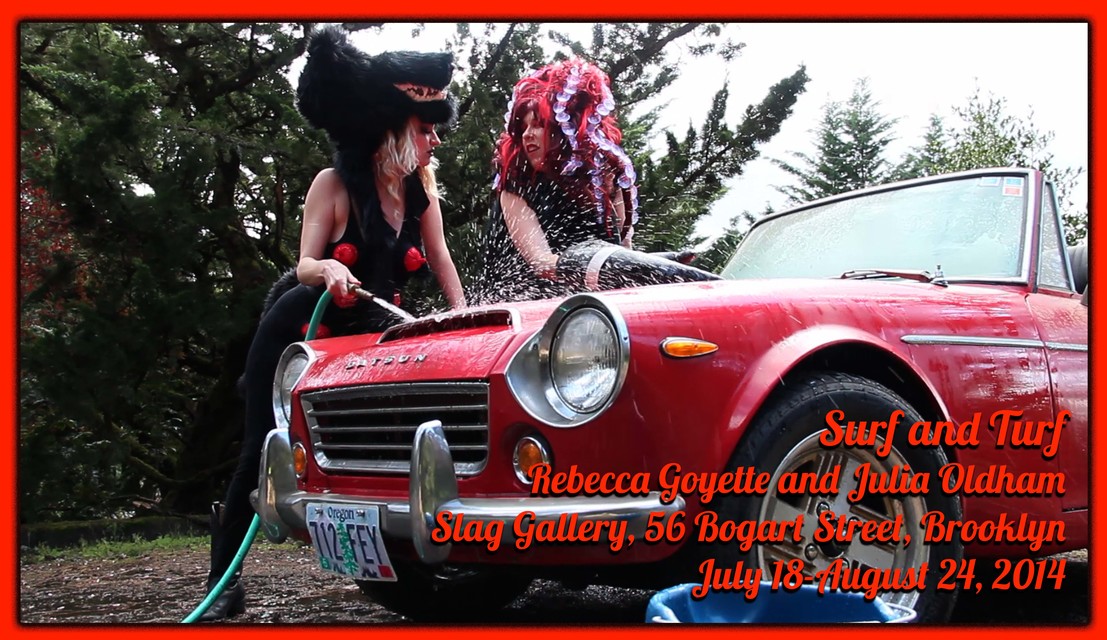 Goyette and Oldham collaborate on the title piece Surf and Turf, a road movie shot on the coast of Oregon. Eccentric animal spirits Octopussy and Wolftits explore the interstices between land and sea. "We don't yet know the purpose of our journey,” Wolftits exclaims to their spiritual channeler, who replies, "Well, that is the best way to start any journey." The possibilities of transmutation fuel their quest, while they suffer individual personality traits. Octopussy is fearful of men, as female octopus die in childbirth; she tries to keep her dentata closed. Wolftits can’t help but rip the throat out of each new friend she meets.

Rebecca Goyette presents Lobstapus/Lobstapussy, a video shot while in residency in Greece. Goyette’s Lobsta Girl arrives with a duffle bag full of double dick speedos and lobsta lady gear, intending to do it with a myriad of Greek lobsta men. Knocked up by an octopus, she returns to NYC to birth her Lobstapus baby, orgasmic-buttah-bath style. Goyette also exhibits costumes, props and sculptures she created for Lobstapus/Lobstapussy and Surf and Turf handcrafted out of fabric, clay, ritual objects and found materials. Rebecca Goyette has a BFA from RISD and an MFA from SVA. She has shown widely in NYC and internationally, including solos at Freight and Volume, NYC, Airplane Gallery, NYC, NY Studio Gallery, NYC, Jersey City Museum, Jersey City, NJ and Galerie X, Istanbul, Turkey. She completed residencies at DNA Summer Residency, Provincetown, MA, Offshore Project, Kardamyli, Greece, and Byrdcliffe in Woodstock, NY.

Julia Oldham chronicles her love affair with a coyote in the old growth forests of Oregon. Mud Lair, a collaboration with Israeli animator Jenny Kroik, is a musical fairytale about a woman burying the memory of her coyote lover; and its sister piece Coyote I Say is a bluesy lament about being led astray by a trickster coyote lover. Her accompanying drawings are fantastical representations of the physical union of the artist with wild animals. Julia Oldham’s work has been exhibited at institutions including MoMA PS1 in NYC; the Dia Foundation in NYC; the Museum of Contemporary Art in Chicago, IL; and Smithsonian Hirshhorn Museum in Washington, DC. She has been supported by Artadia, the Fund for Art and Dialogue, NYC; Art in General, NYC; and the Lower Manhattan Cultural Council in NYC.