Click for more information on Tirtzah Bassel or Dumitru Gorzo 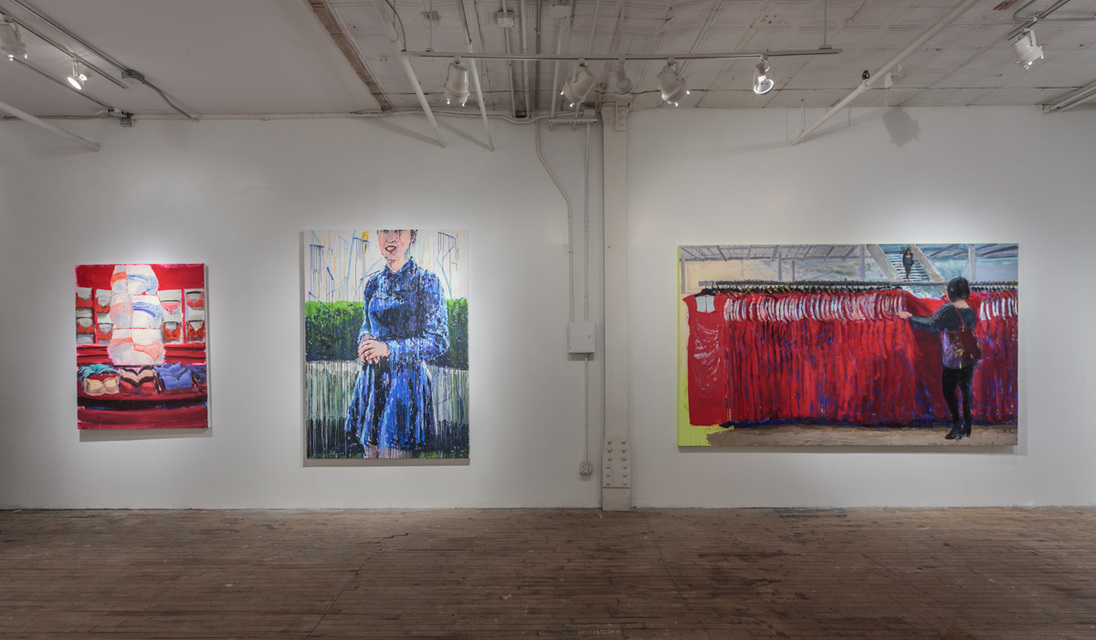 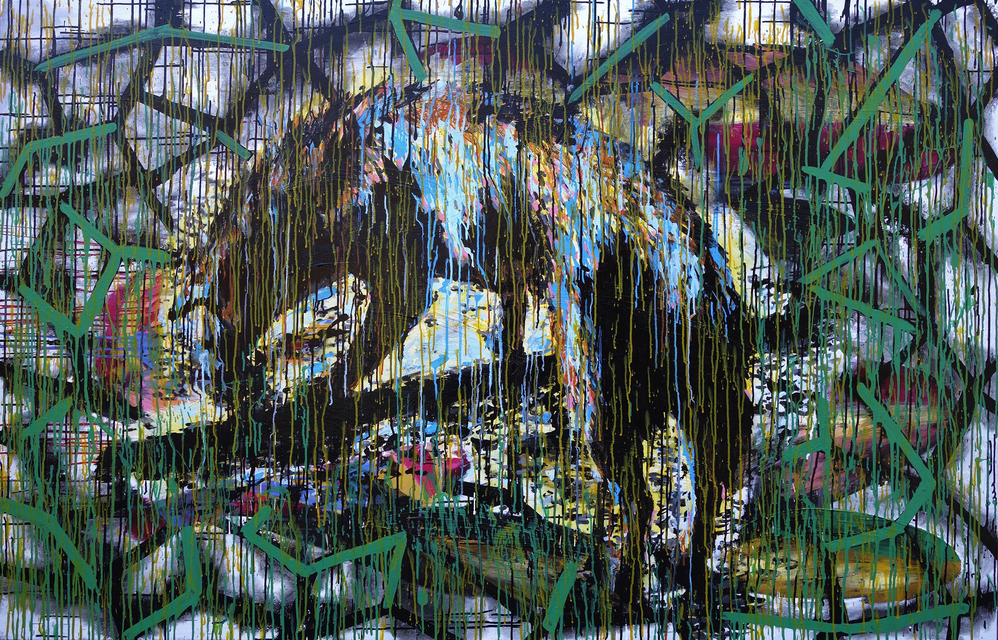 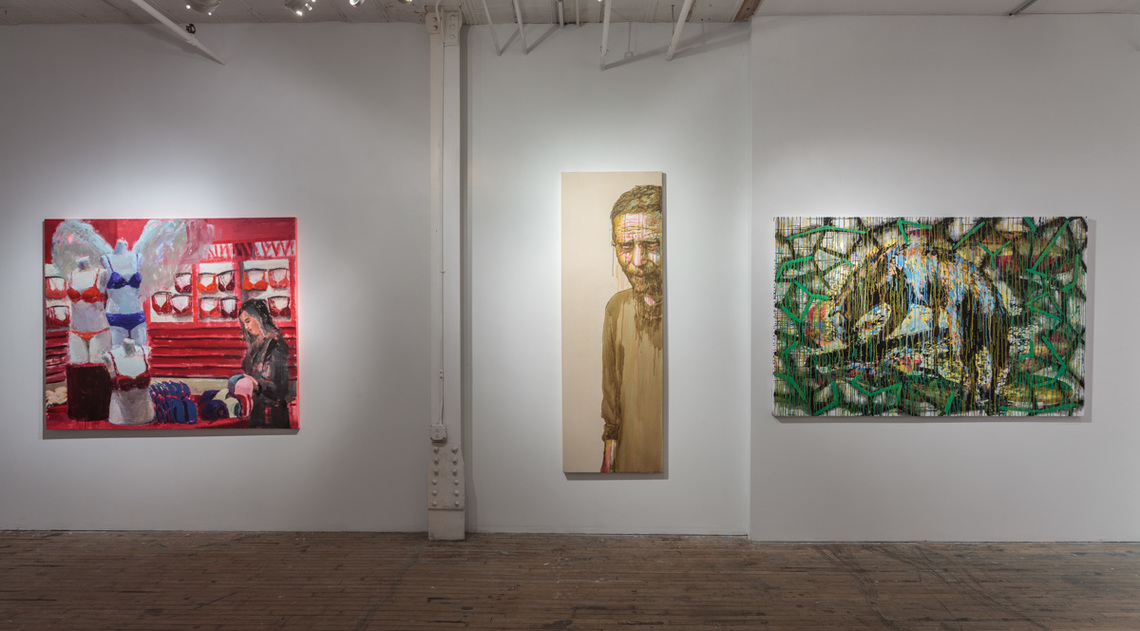 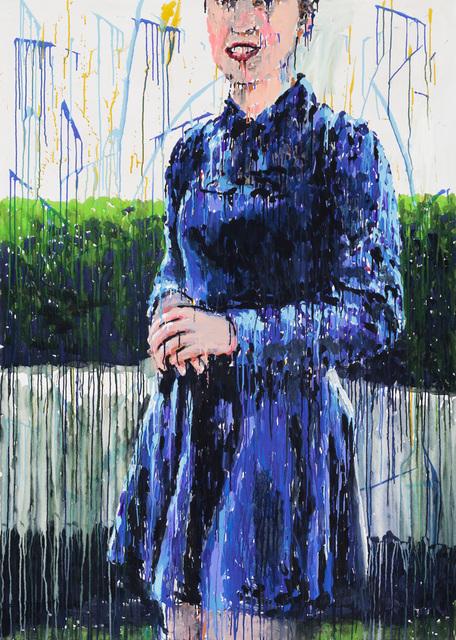 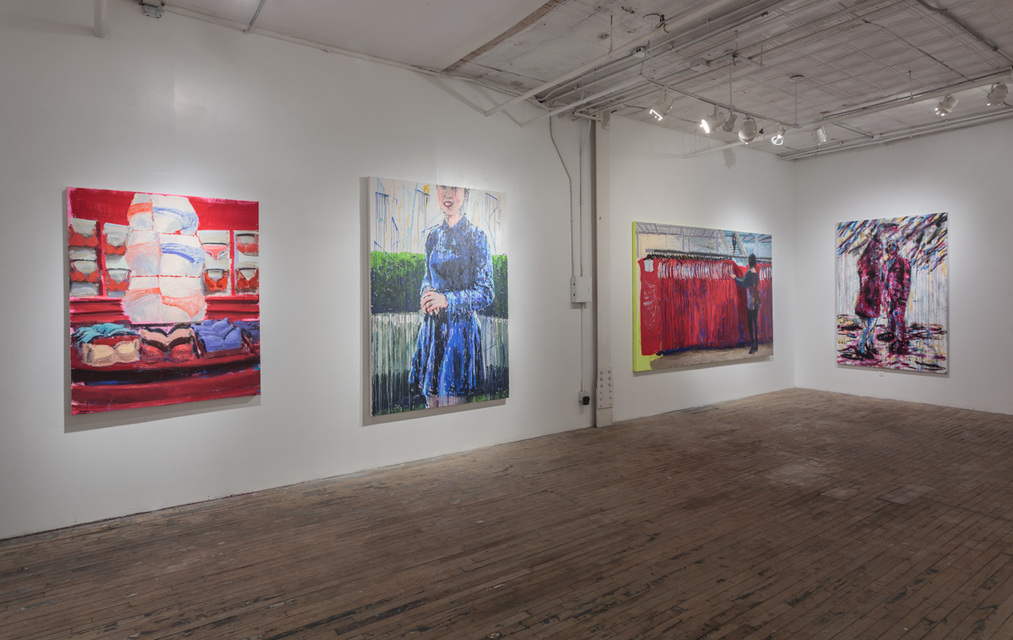 Propelled by an interest in French anthropologist Marc Augé’s concept of non-space, Tirtzah Bassel has previously formed a locus of inquiry around the often-disregarded settings of airports, furniture stores, and supermarket lines. In RITES,Bassel continues her nearly life-size representations of these forgotten moments, and renders common retail spaces in rich texture and bold color, capturing figures in public moments of private tactile inspection. We have become used to allowing our most intimate possessions and needs to be on public display in the name of commerce, and while spaces like Victoria’s Secret or large department stores are for all of us a shared place and a common narrative, we tend to travel through them unobserved. Elevating these spaces to a higher form, Bassel manages to capture specific moments that resonate with an odd universality.

Hailing from Romania, Dumitru Gorzo plays with the modes in which we look at both artwork and everyday moments in his transformations of otherwise common scenes into darkly colorful, layered works. His pieces in RITES function as a critique of the perceived divide of figurative and abstract painting. Interested in a semiotics of form, he argues, “There is no figurative painting, any image is nothing but a symbol or representation of something else.” Here Gorzo has treated the canvas as though it were various drafts of a layered text, as each image has been composed on top of a series of paintings below the final surface, lending a readable sense of time, texture, and memory to the work. In doing so, he captures the act of painting as simultaneously a destructive and creative action. His figures often engage with the viewer, maintaining eye contact as stilled drips and geometric shapes indicate movement and a false stoppage of time.

Tirtzah Bassel studied drawing and painting at the Jerusalem Studio School in Israel and holds an MFA from Boston University. Her work has been reviewed in Huffington Post, Hyperallergic, New York Daily Report, Arts in Bushwick, Ynet, The Forward, and The Boston Globe. Bassel is Assistant Director of the Institute for Music and Art at Brandeis University. She is the recipient of a 2011-2012 LABA Artist Fellowship at the 14th Street Y in New York, was invited to the Sixpoint Asylum International Artist Retreat in 2013, and currently serves as a resident artist of the Chashama Visual Arts Program in Sunset Park, Brooklyn.

Dumitru Gorzo received a BA in Painting and a Post-Graduate Diploma in Advanced Studies in Plastic and Decorative Arts from the University of Arts in Bucharest, Romania. He is a co-founder of the artist group and movement Rostopasca, the most influential artist group in Romania for the last few decades. Gorzo has had solo shows in museums such as MNAC (Bucharest), NJ MoCA (New Jersey), and Brukental Art Museum (Sibiu), as well as in art galleries and not-for-profit art institutions across the US and Europe. He has participated in numerous group exhibitions at prestigious art venues such as the Istanbul Biennial, Marina Abramovici Institute (San Francisco), Kunsthalle Budapest (Mucsarnok), MODEM Modern and Contemporary Art Center (Debrecen), and Museum Küppersmühle (Duisburg) and Boulder MoCA just to name a few.