Fancy Seeing You and Involuntary Voyeurs

Click for more information on Avital Burg or Tina Schwarz 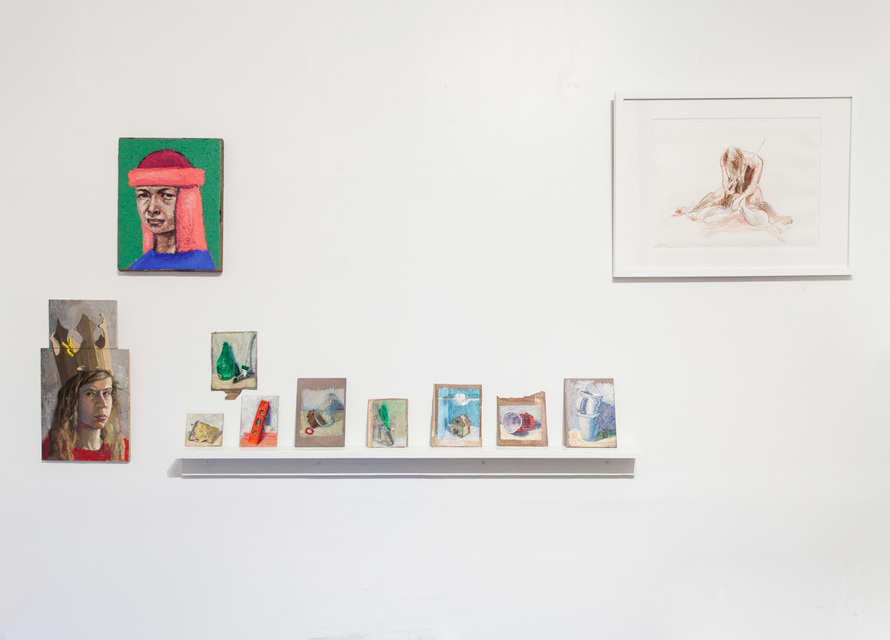 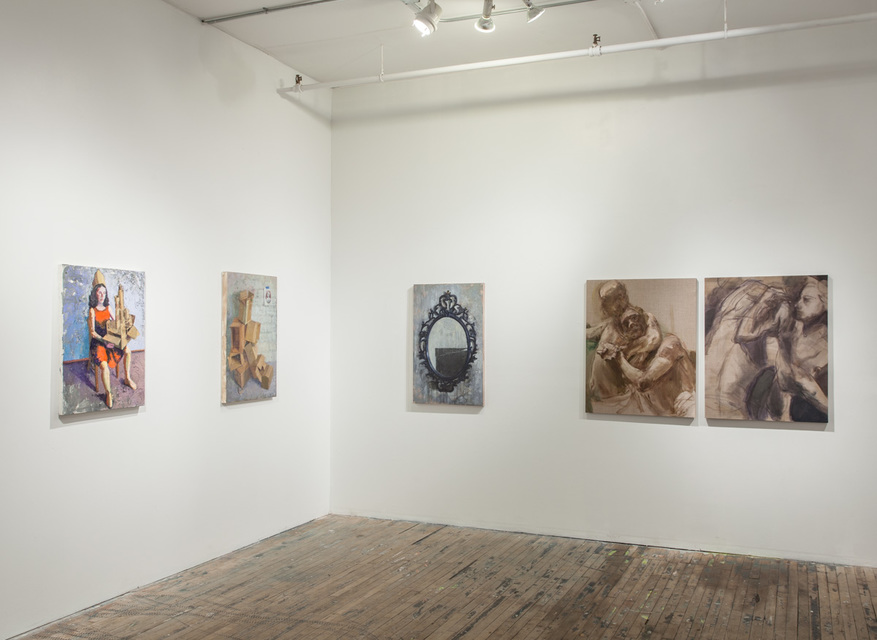 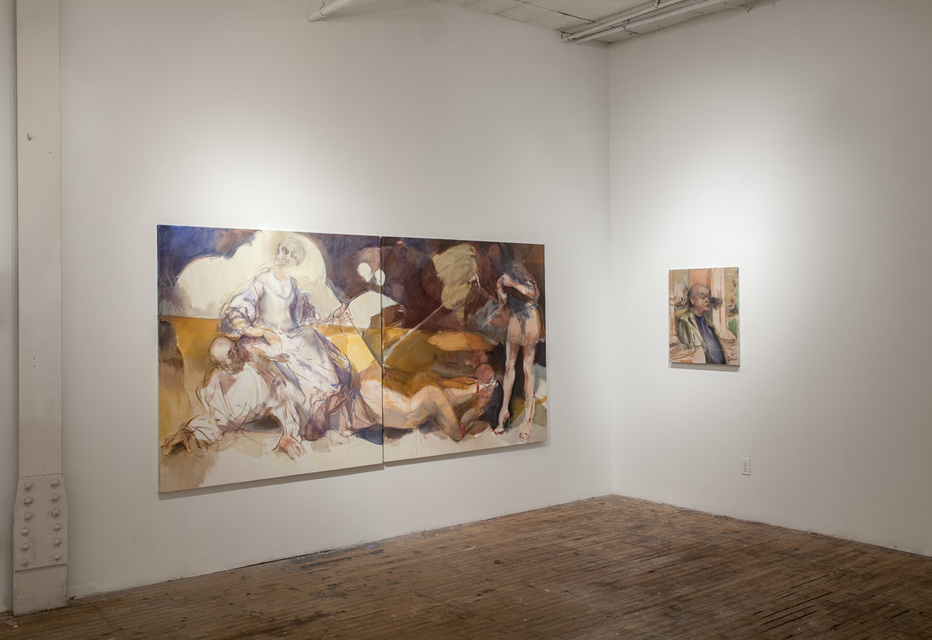 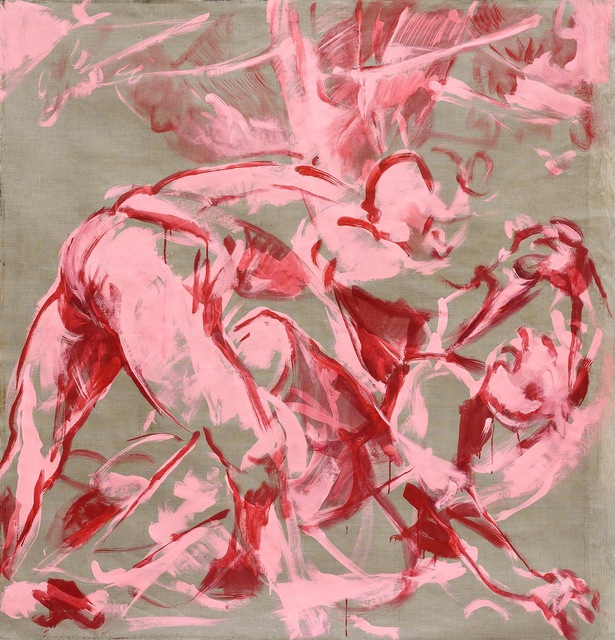 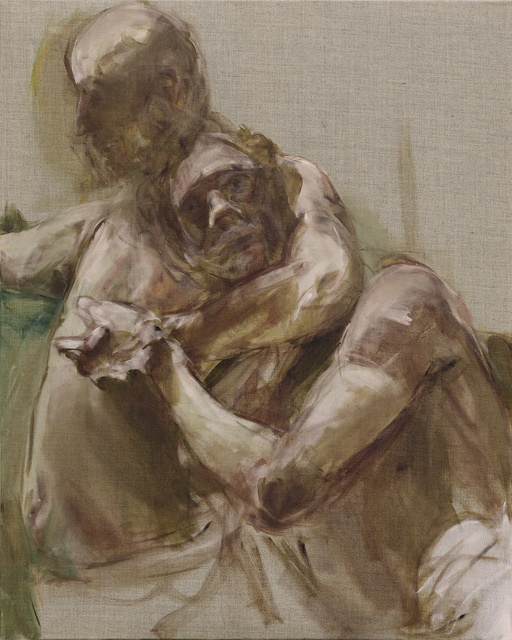 Tina Schwarz, Keep the Feet Grounded I (herakles and antaios), 2015 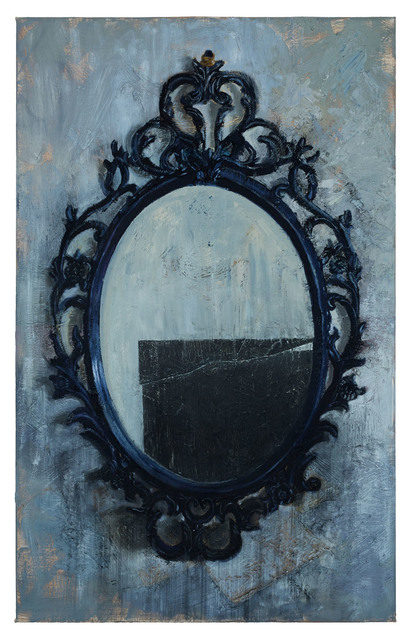 Slag Gallery is pleased to present Fancy Seeing You, a collection of works by Avital Burg, and Involuntary Voyeurs, by Cologne-based artist Tina Schwarz. Both artists create an overlap between fantasy and the actual world, and exhibit an interest in the ambiguities of memory and daydreaming, along with the relationship of an individual to the past.

In 1979, Italian architect Aldo Rossi designed his Teatro del Mondo, a floating theater, for the Venice Biennale. The structure recalled the theaters and carnivals characteristic of Venice in the 18th century, and drew on the architect's memories of his own childhood imagination. Rossi described the project as "a place where architecture ends and the world of imagination begins.” Working from Rossi’s blueprints and drawings, Avital Burg built a model of the architect’s theater with found cardboard and blue painters' tape. This model became one of a continuing series of studio set-ups from which Burg paints imaginary structures, such as a large cardboard castle inspired by the fortified towns in early renaissance frescoes. Rossi expressed the belief that cities serve as keepers of a culture's collective memory. Burg's paintings prompt the viewer to wonder what past these cardboard structures might themselves remember.

Involuntary Voyeurs continues a painterly exploration of ancient mythologies and fantasy made current, bringing individuals from the past into more present-day forms. Tina Schwarz draws on contemporary renderings of Greek fabulists and philosophers in her works. A tired Aesop smokes a cigar with a focus that seems both inverted and yet gazes on something outside of the painting. The apocryphal tale of Phyllis and Aristotle is re imagined as a diptych of carnality and death, where the past bleeds into the present to show the universality of human behaviors.

Avital Burg is a New York based artist. She has shown work recently at various venues such as Spaceship Gallery in Tel Aviv, the Greenpoint Film Festival in New York, Hanina Gallery in Tel Aviv, Slag Gallery in New York. She is the recipient of Award for Excellence, Israel Museum, 2003, among other awards. Burg attended the Bezalel Academy of Art and Design in Jerusalem, the “Hatahana” school of figurative drawing and painting in Tel Aviv, The Slade School of Art in London, and the New York Studio School.

Tina Schwarz studied at both Fachhochschule für Design in Düsseldorf and the Akademie für Beeldende Kunst in Maastricht, NL. Her work was recently shown in solo exhibitions at Galerie Artepari (Graz, Austria), Galerie Marc Schmidt (Berlin), and Galerie Alex51 (Maastricht), to name some recent shows. She lives and works in Cologne, Germany. Schwarz is represented by Martinetz Gallery, Cologne.