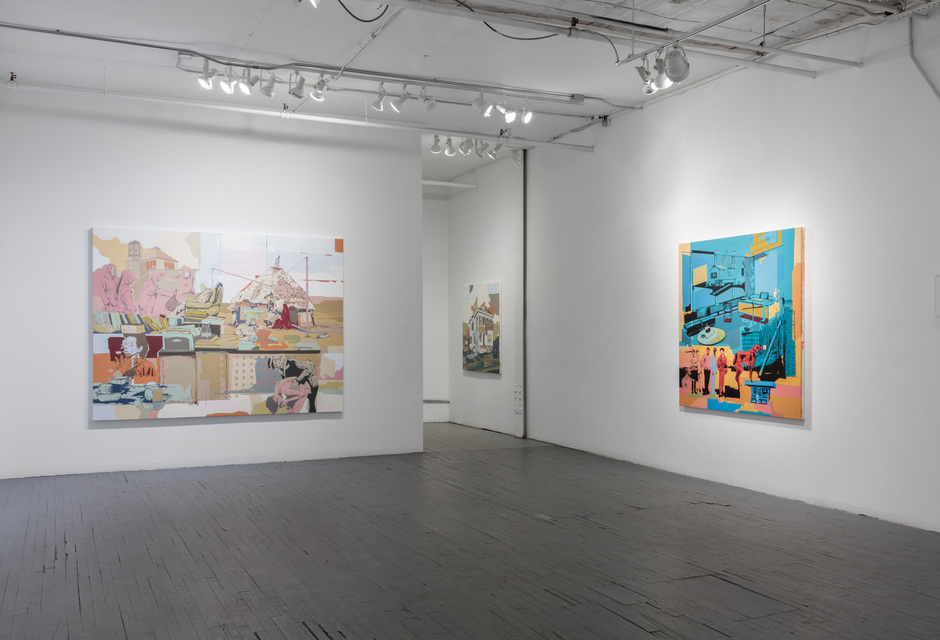 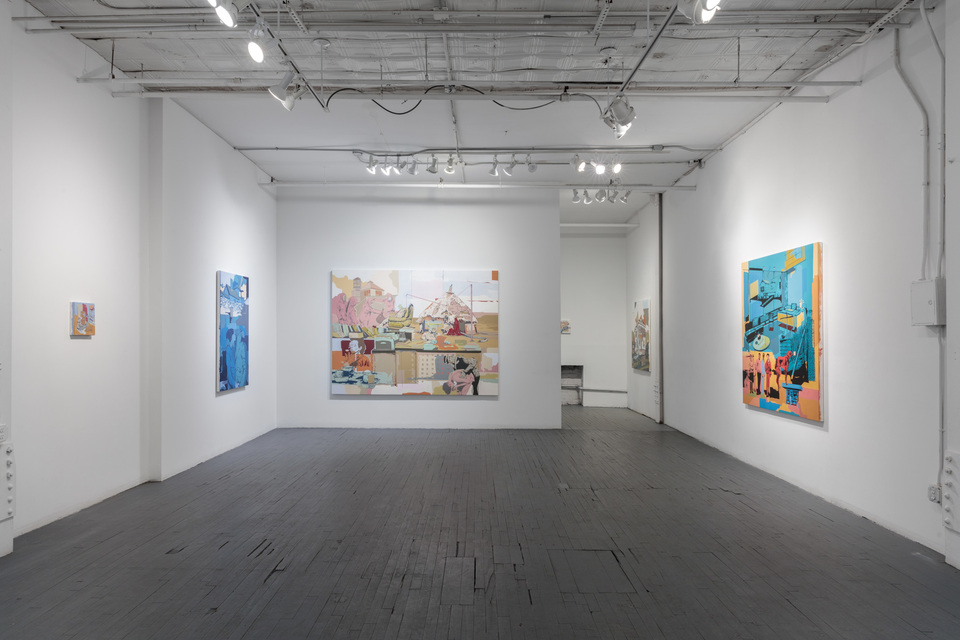 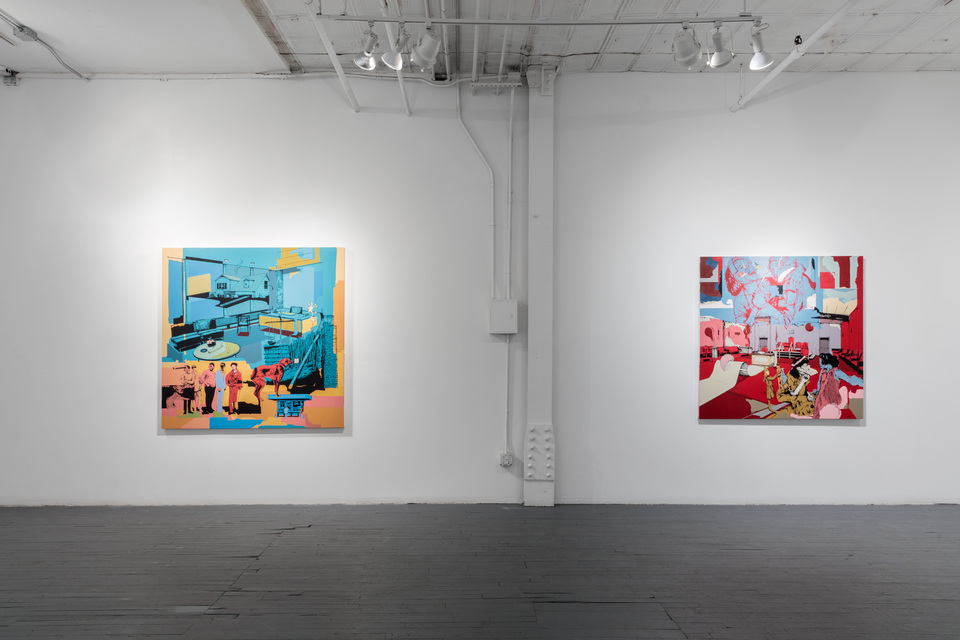 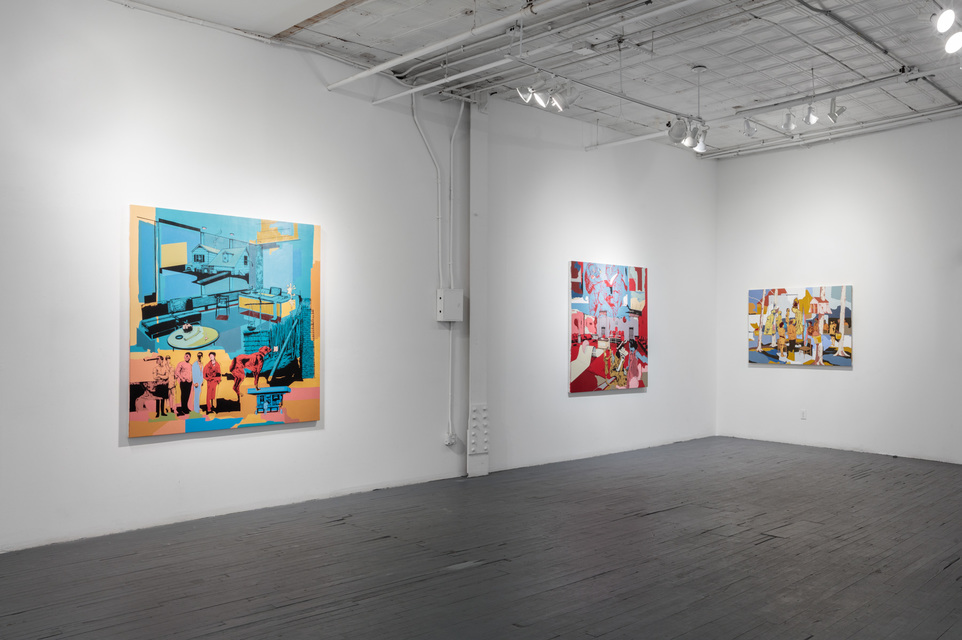 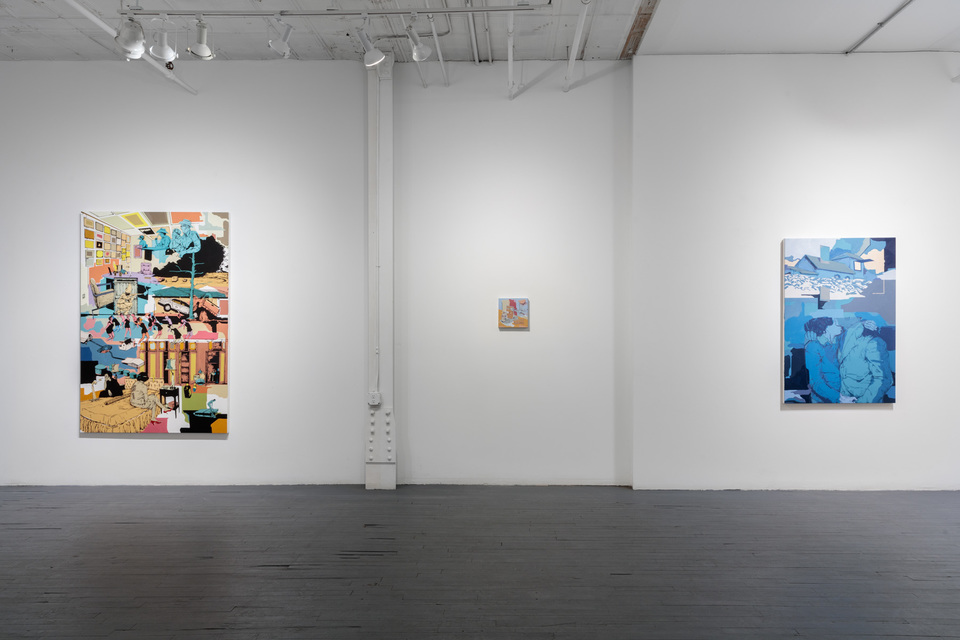 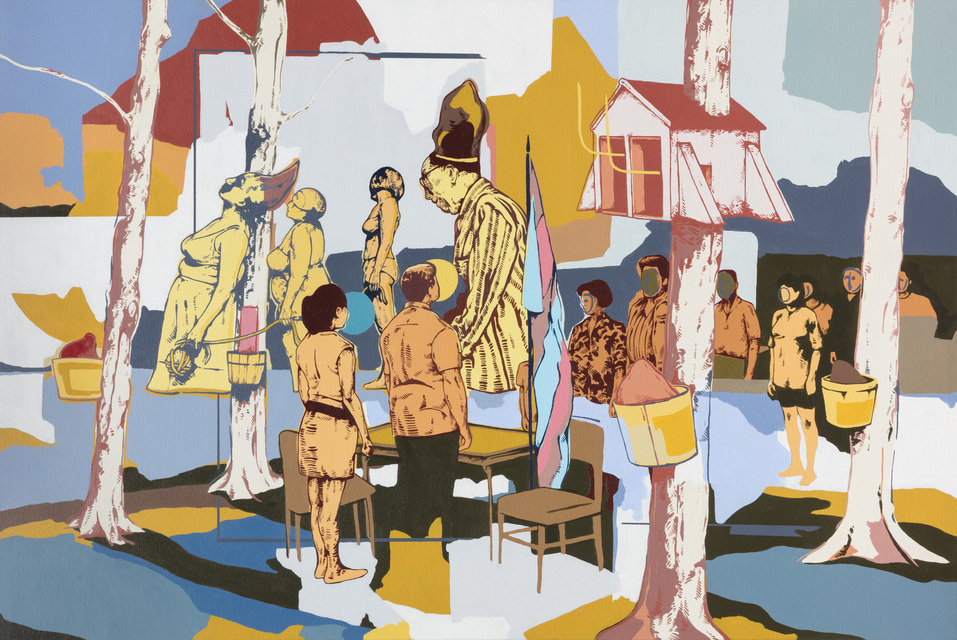 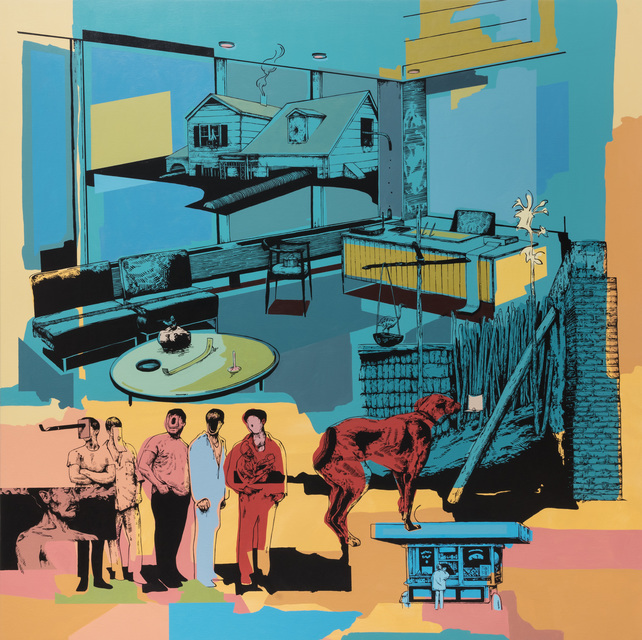 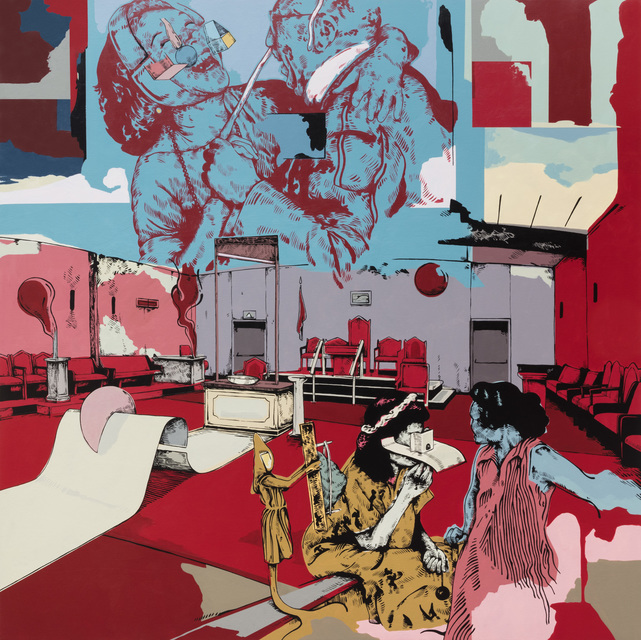 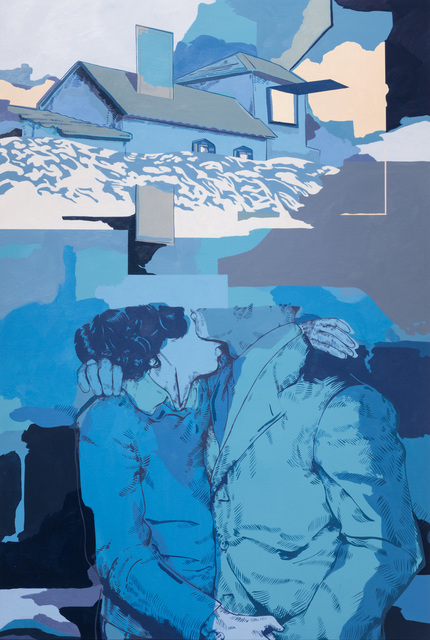 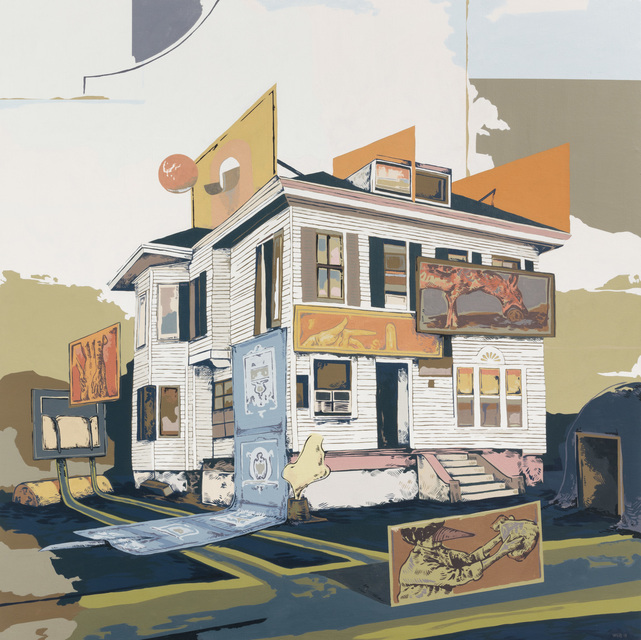 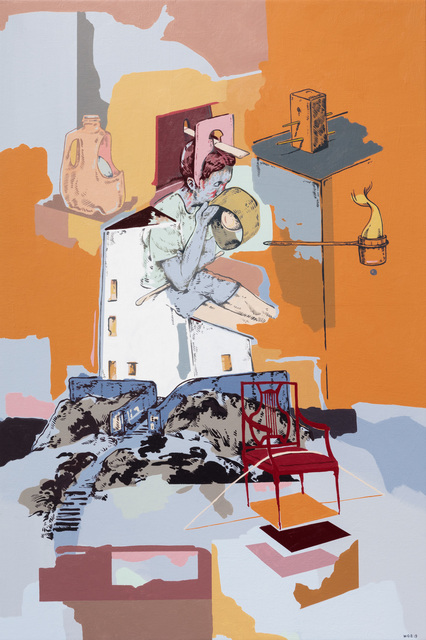 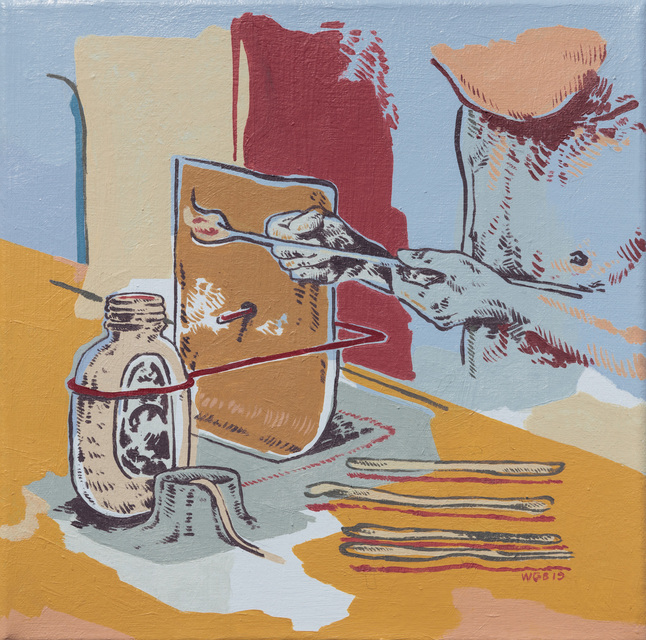 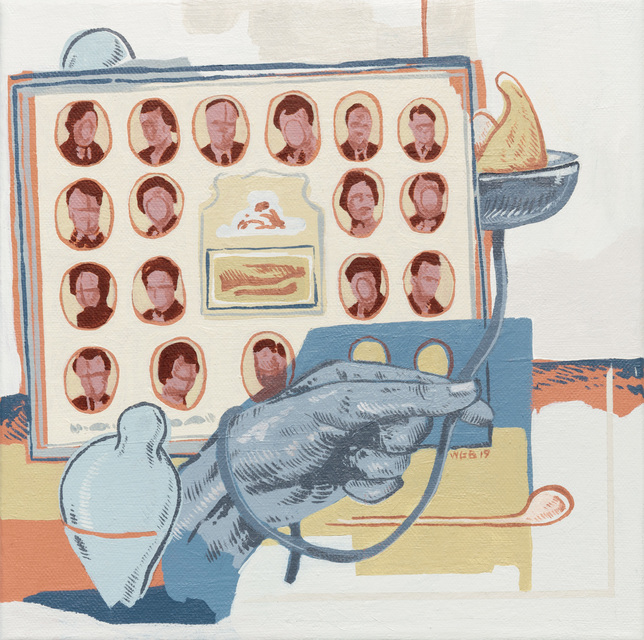 Slag Gallery is pleased to present Between Object & Action, an exhibition of eight new works by William Buchina. This is the artist’s third solo show with Slag Gallery.

William Buchina is an artist driven by a curiosity in ritualized human behavior. His new paintings in Between Object & Action further his deconstructions of social norms and conventions, but mark a new body of work that, while continuing to feature his surrealism-infused social realism, incorporates a collage-like technique that gives the work new layers of multi-dimensionality, painterly and conceptual.

Each piece is an assemblage of figures and scenes that Buchina obtains from historical and contemporary mass-produced imagery. He gleans the New York Public Library’s century-old, million-image Picture Collection for source material, but also collects it in his everyday perambulations through books, periodicals, and the web. A figure or object found from an old magazine page becomes a feature effected with intricate strokes of black acrylic, but not without both figural and abstract alterations: Masked subjects and small orbs, both hinting at Hieronymus Bosch, appear in Buchina’s appropriated scenes along with houses layered over large rooms and more human figures—often faceless to strip them of their emotion—depicted in embrace or conversation.

The delicate brushwork Buchina employs mimics the tools of an illustrator to meld together his disparate source material, allowing him to disassemble any everyday ritual into its component parts of symbolism and performance, concepts their practitioners would take for granted, concealed by their quotidian function. His precise renderings float above a variegation of flat color fields that illuminate both the canvas and his vignettes, and these direct the viewer’s eye, compartmentalizing his figures and scenes, but also inducing a context-vacuum around other representational elements. Like the artist’s illustrative technique, this neutrality enables the viewer to intuit a novel narrative from his graphic amalgamations. In one of Buchina’s works, “Between Object & Action #4,” at least five different vignettes are immediately recognizable, spaced across the canvas with shifts in perspective, size, and his color fields. Several masked or faceless figures appear to wait in a line, looking off into the distance in the bottom of the frame. A dog, painted in red, appears linked to the figures due to its positioning and despite its larger size, while the interior of an office looms largest on the canvas, each other vignette having a gravitational relationship to its presence.

Buchina could be deemed a collagist, and cites as an influence neo-dadaist Ray Johnson, yet his pictorial arrangements give way to a logic that draws his characters and scenes together. His assemblages, like filmic montage, take advantage of the human mind’s compulsion to draw parallels between juxtaposed objects and actions. This phenomenon, named the Kuleshov effect after the filmmaker who first demonstrated it a century ago, is a key thematic tool for filmmakers like David Lynch, whom Buchina names as a muse.

The semiotical deconstruction and recombination at work in Buchina’s paintings provide a path for the viewer to become lost within them. No single viewer’s course may be the same—the narratives of the works’ figures and vignettes will overlap and intertwine, beguiling and enveloping the imagination of anyone who catches sight of them.