The Practice of Everyday Life 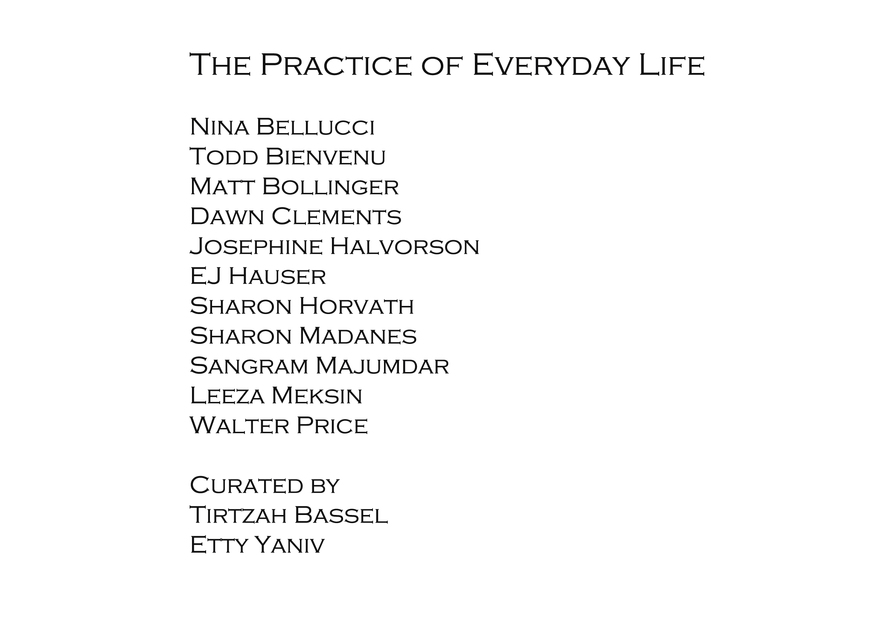 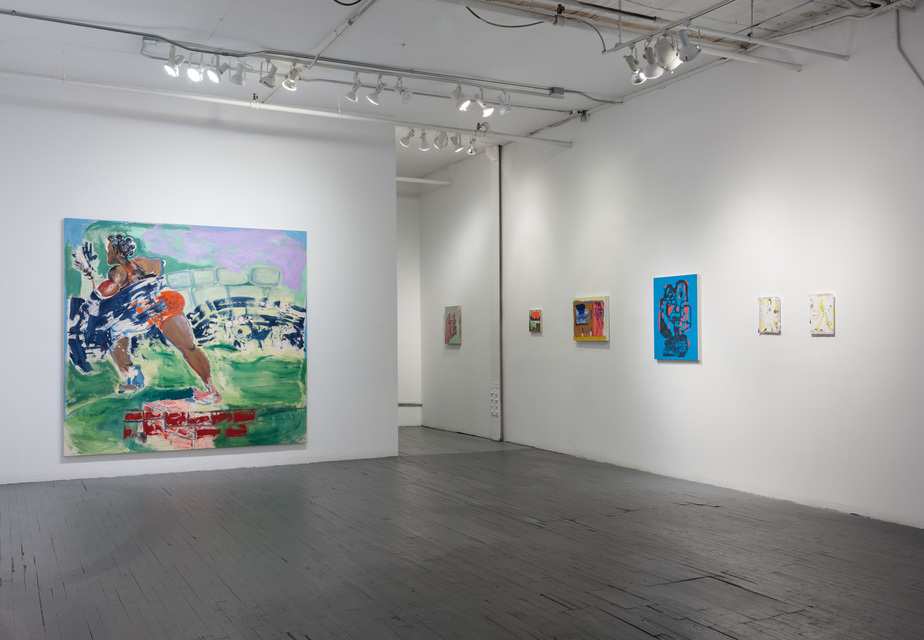 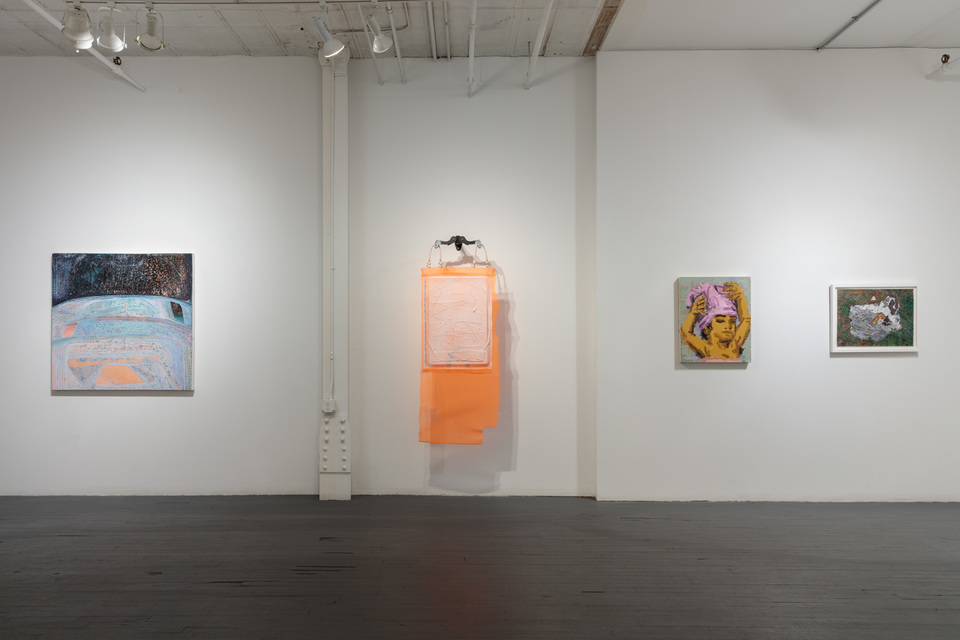 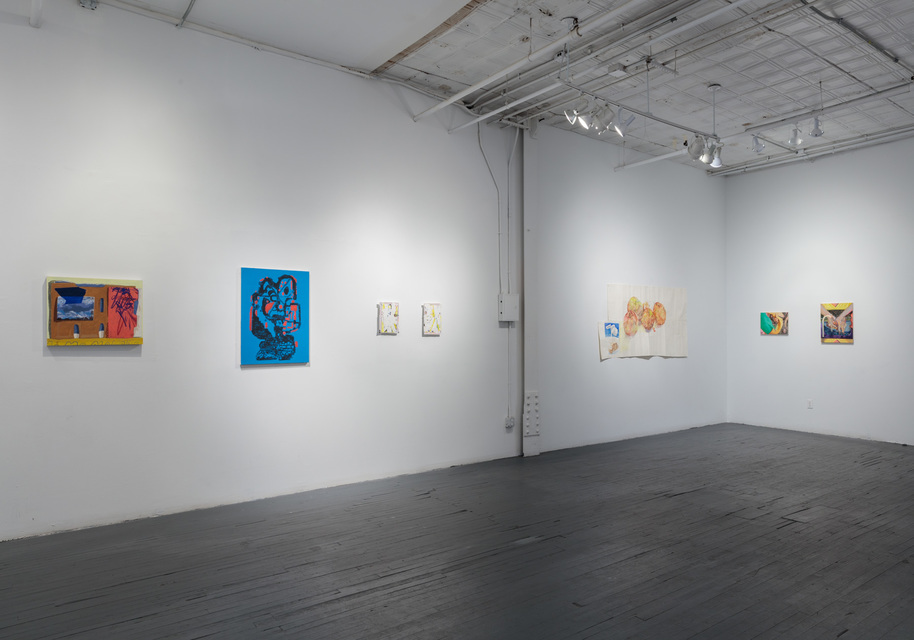 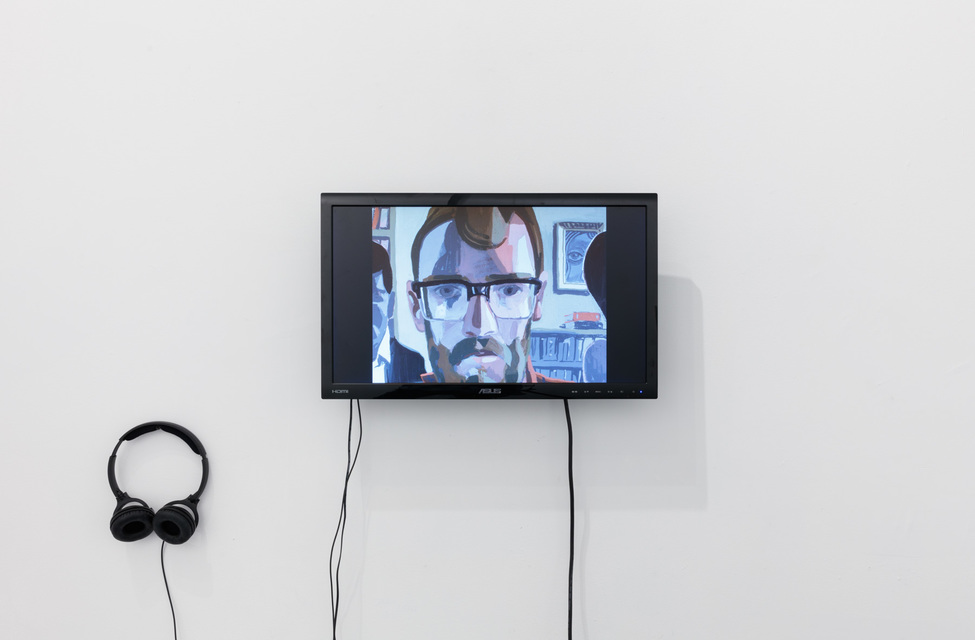 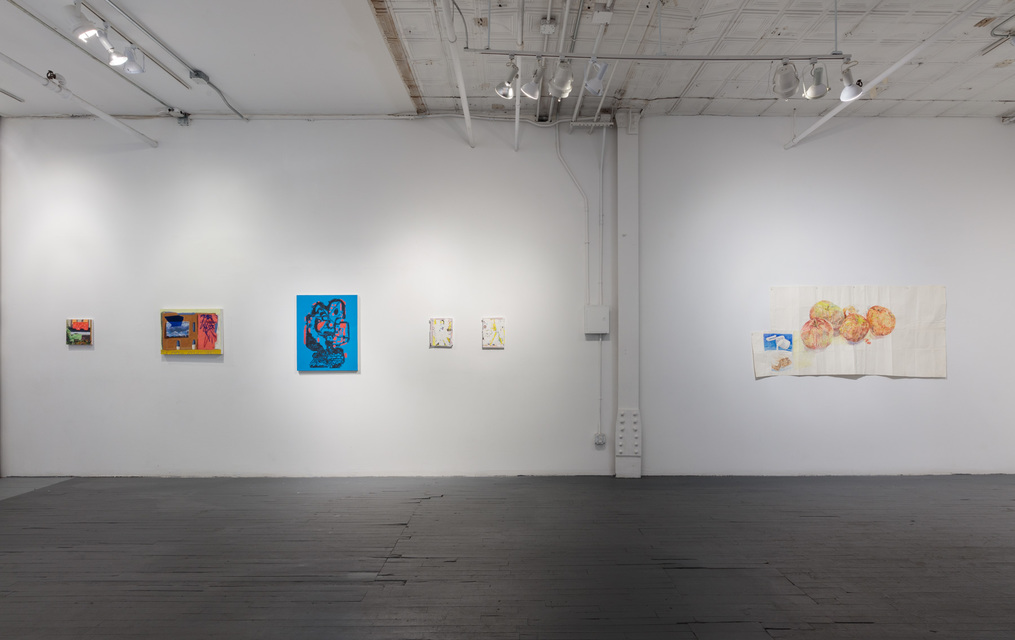 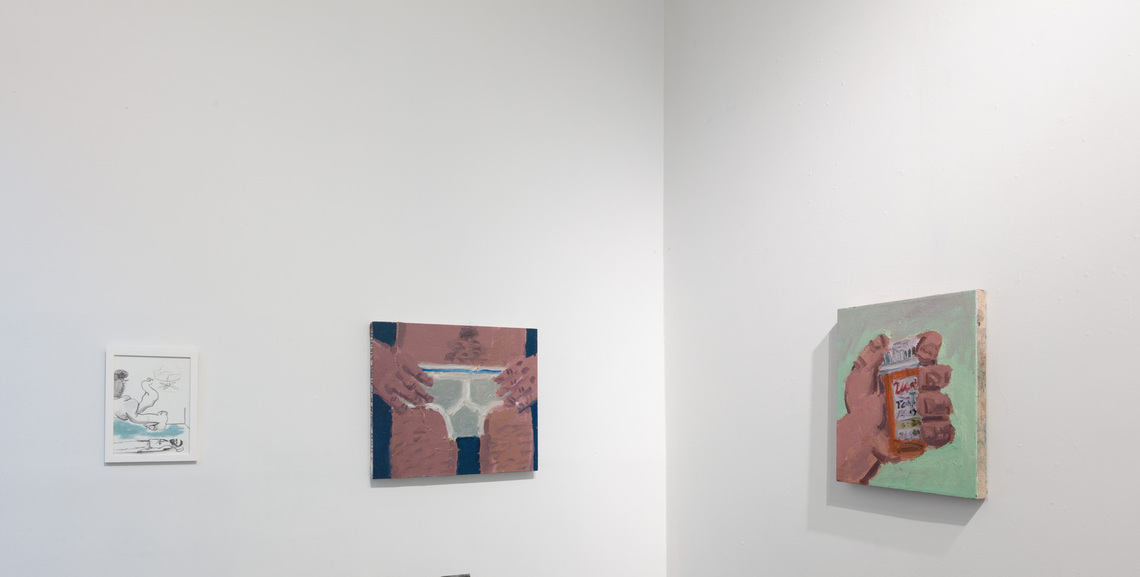 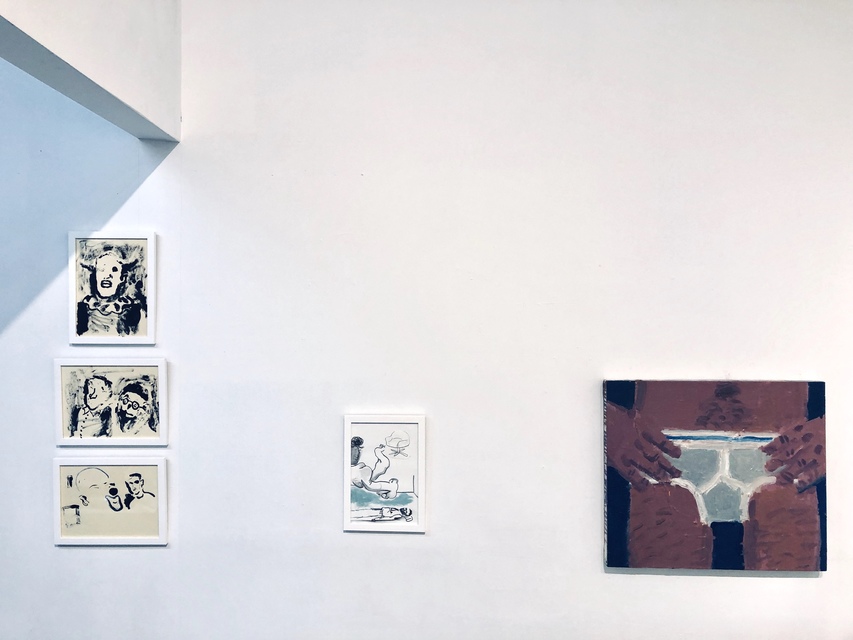 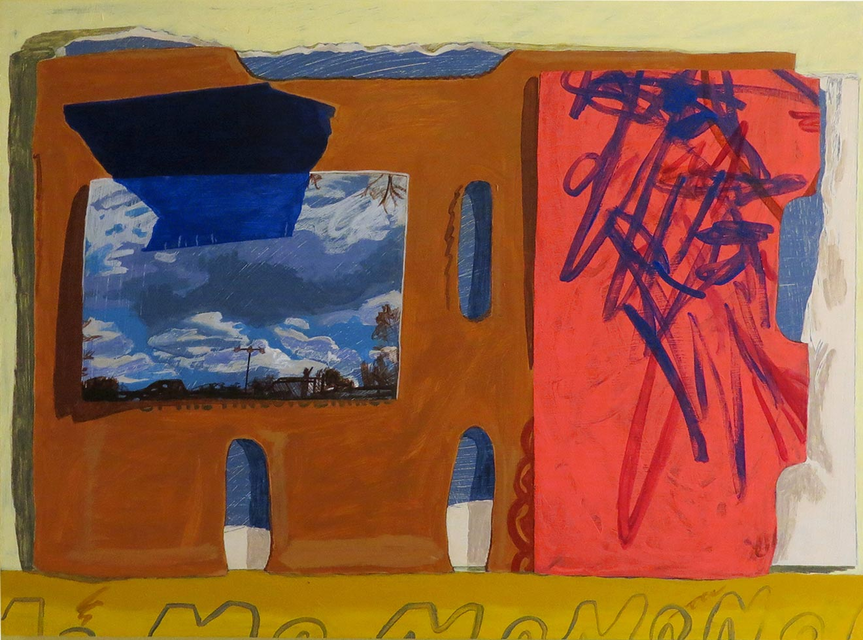 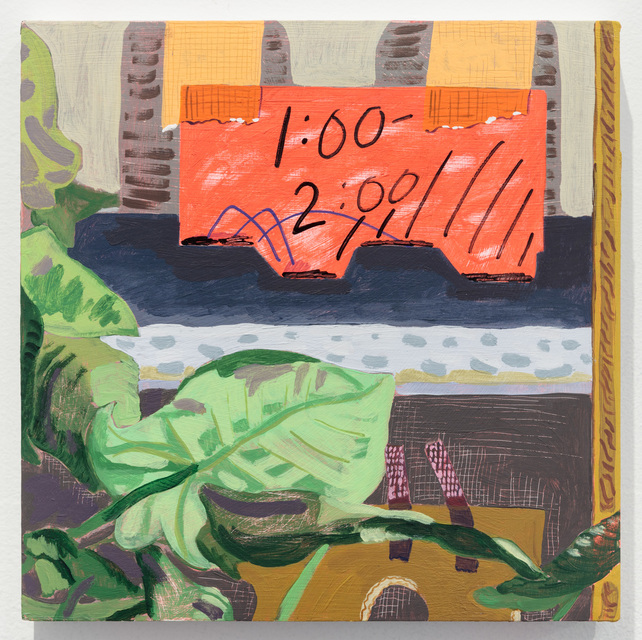 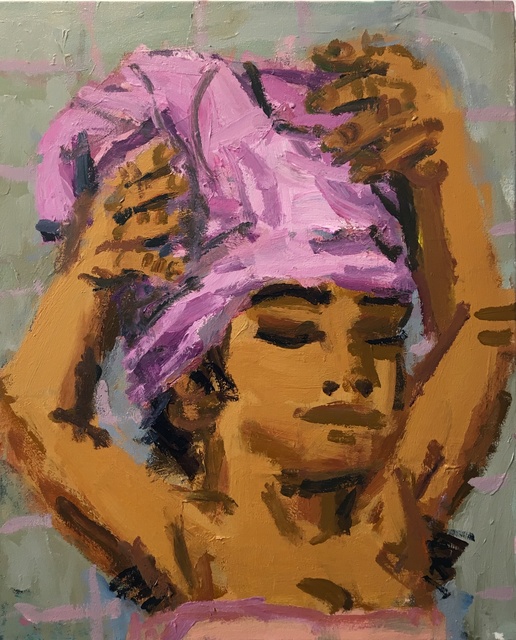 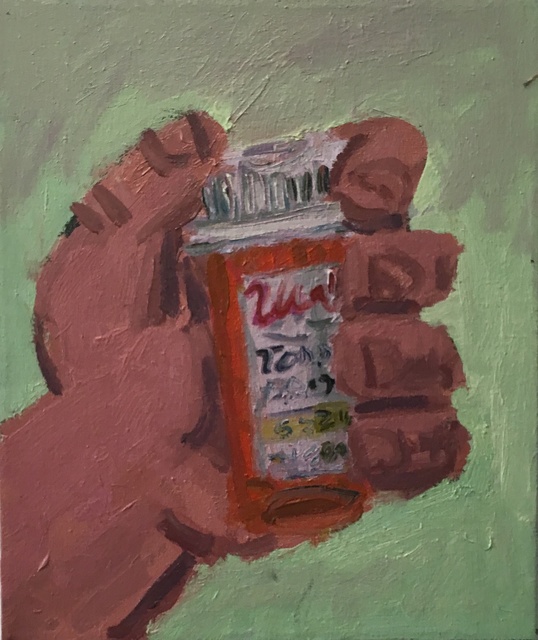 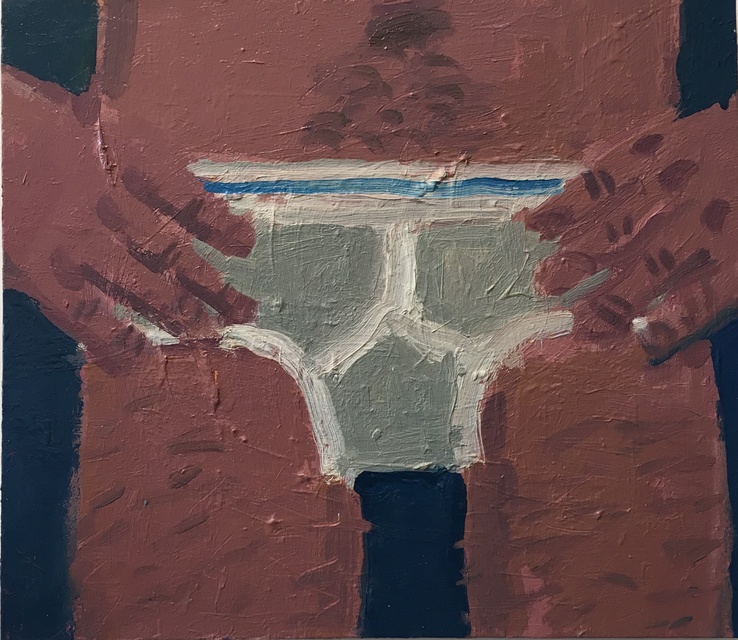 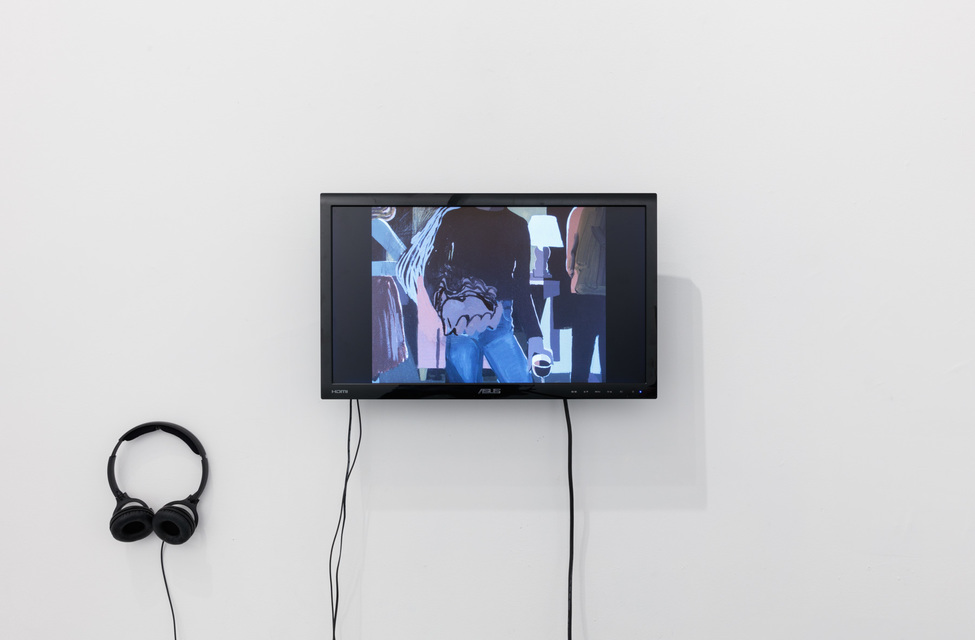 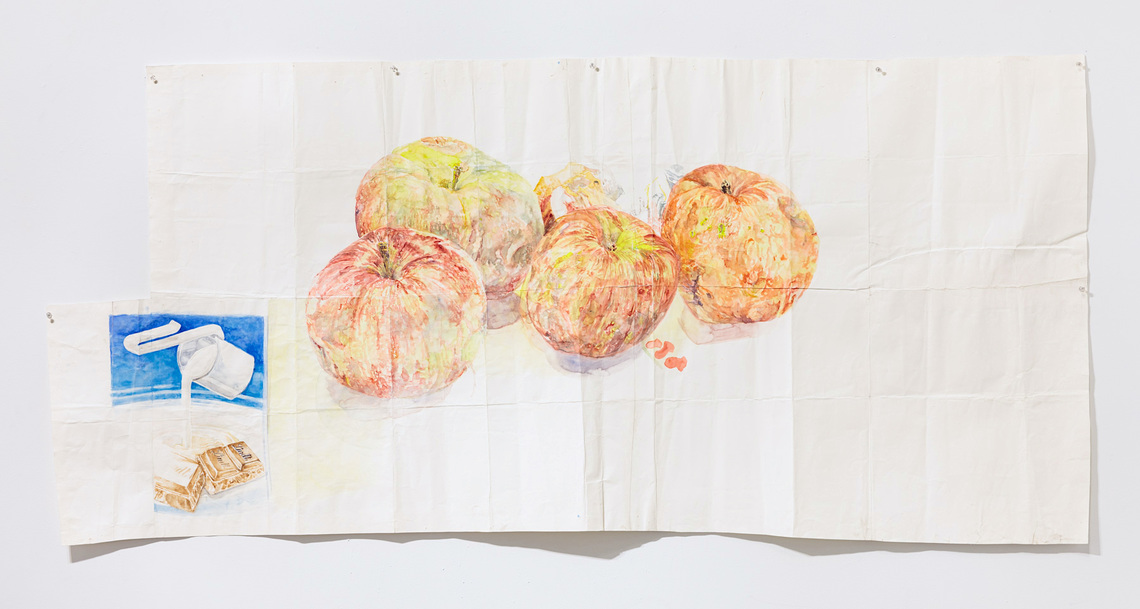 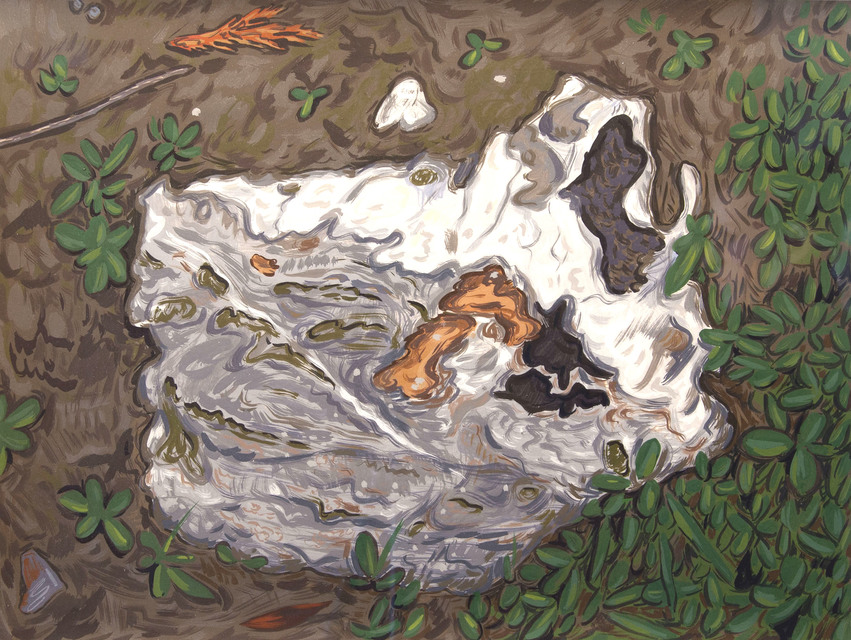 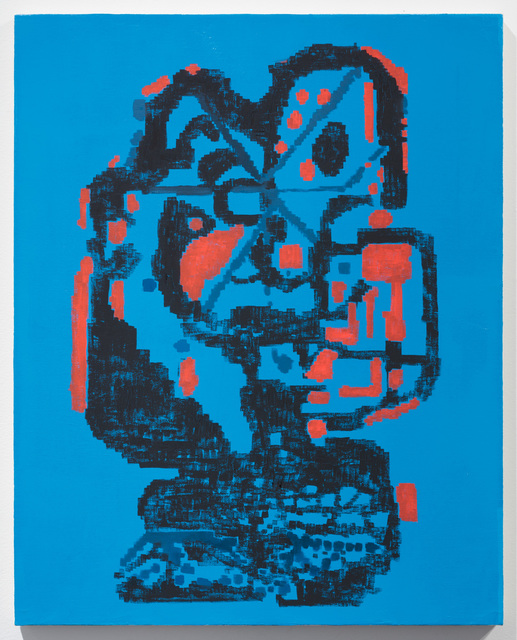 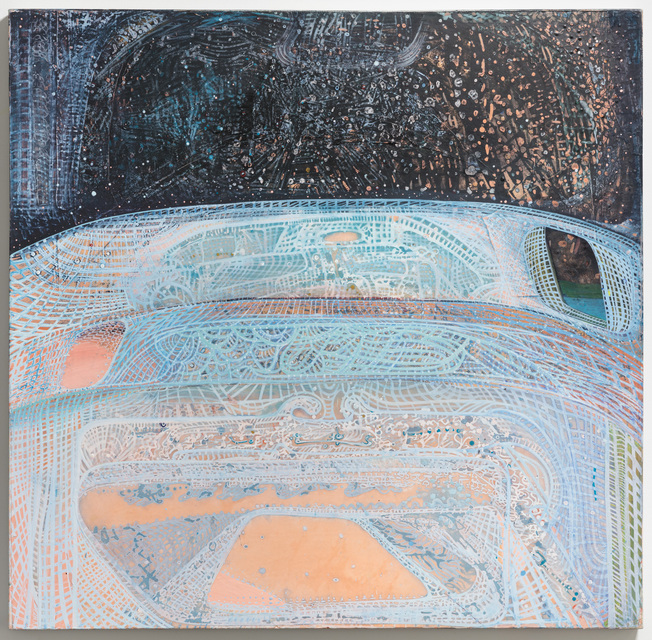 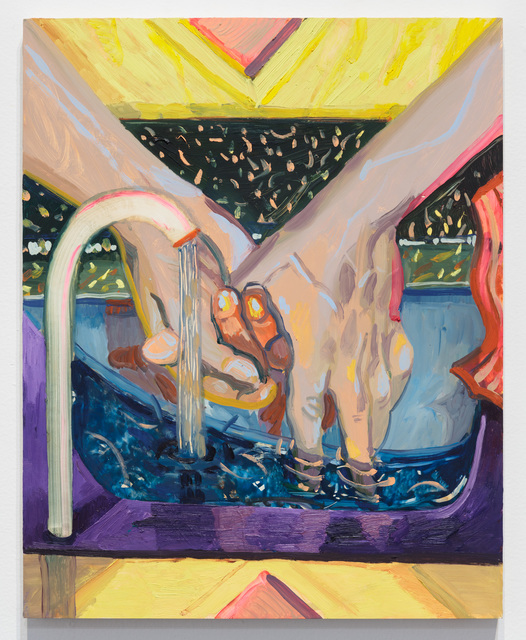 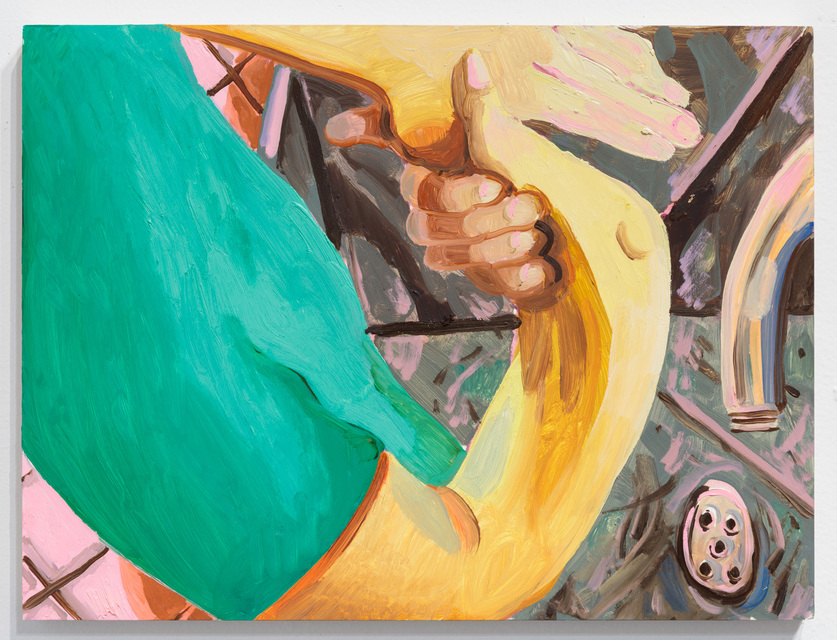 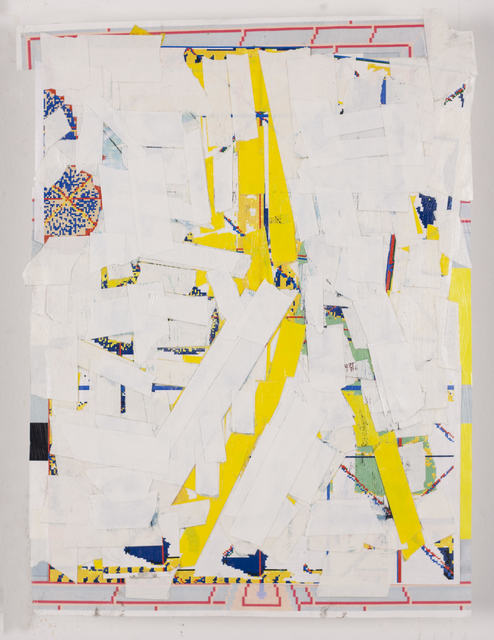 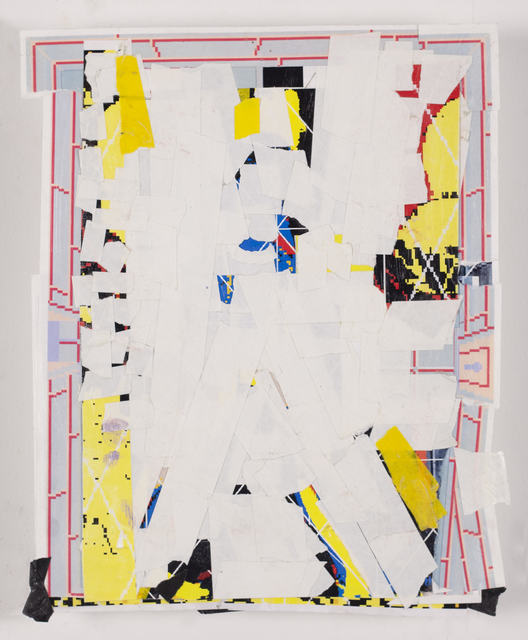 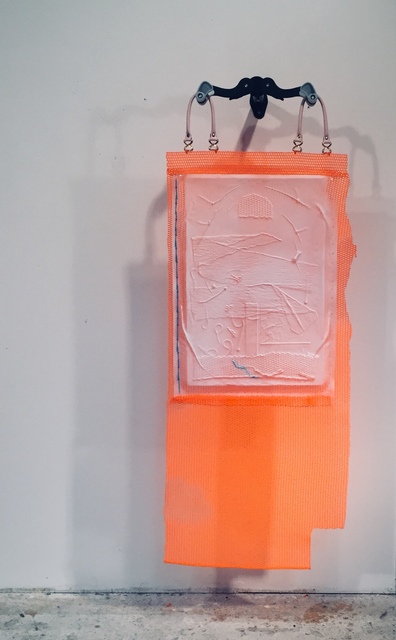 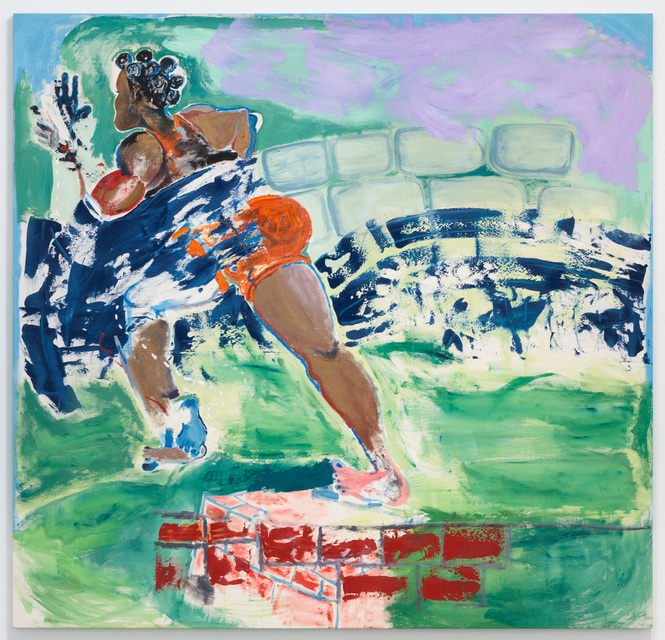 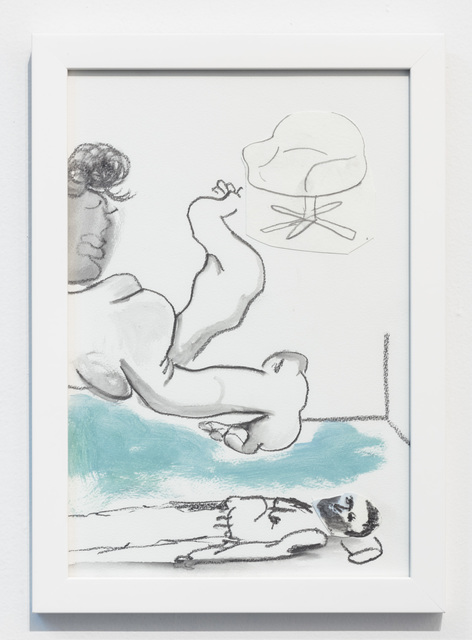 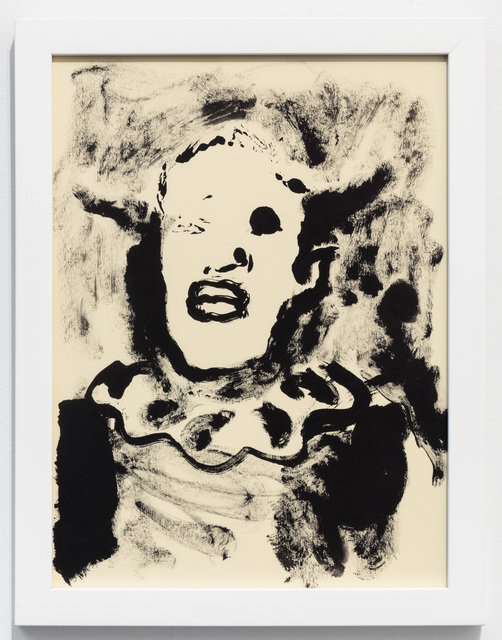 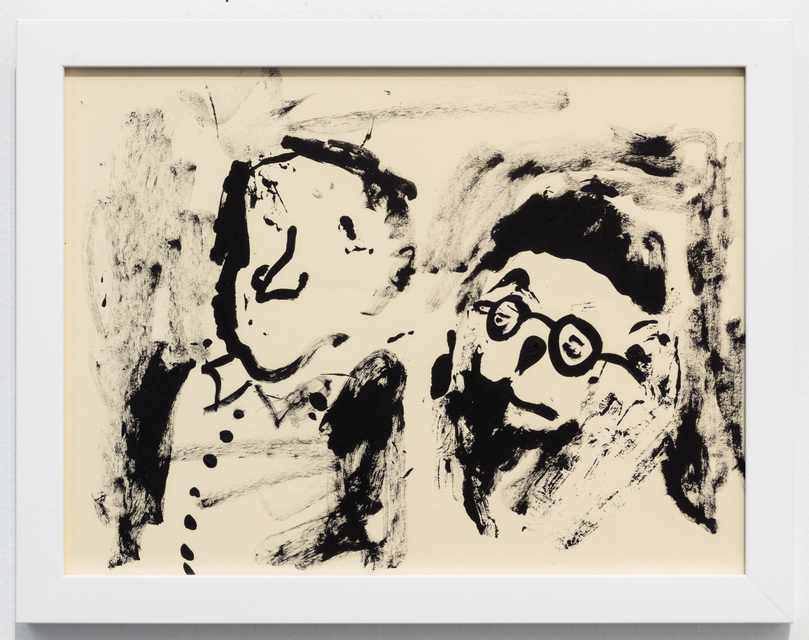 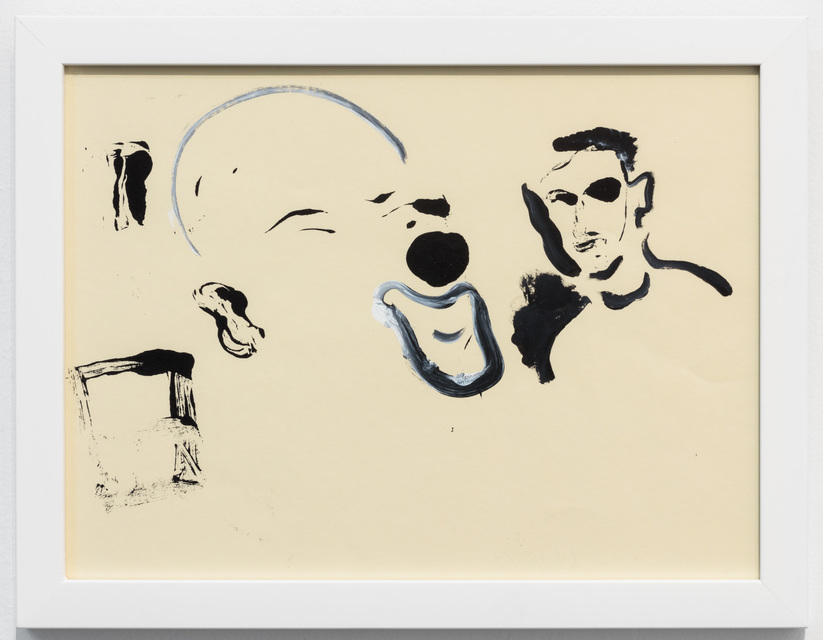 Slag Gallery is pleased to present The Practice of Everyday Life, a group exhibition which brings together eleven painters whose work is rooted in close observation of their daily surroundings. In his book by the same title, Michel de Certeau looks at how people individualize mass culture by manually altering products, rituals, language, and navigation of public spaces.  Often overlooked by established institutions and designers, these small acts become a form of resistance.  Similarly, the artists in the exhibition deploy the act of observation in an ongoing attempt to push against a predetermined reality and make meaning of the structures that shape our lives.

Ranging in size from monumental to intimate, each artist utilizes scale to position the viewer in relation to the work. Josephine Halvorson entices us to look down and observe in detail the ground at our feet.  A large-scale athletic figure in Walter Price's work rips across the canvas with extraordinary psychological impact.  Leeza Meksin embeds plastic vacuum molds of zip ties and purse strings into her vertical composition, using the real-life size of the impressions to establish a sense of human scale while defamiliarizing our visual orientation. The work of Sharon Horvath is intimate in size yet depicts vast spaces, alluding to our smallness in relation to the cosmos.The process of returning again and again to a single visual source is often a key to seeing beyond the obvious. Dawn Clements' committed a predetermined time frame to each section of her work, infusing her diaristic documentation of everyday environments with an acute sense of urgency and subtle poetry.  EJ Hauser draws the same image over and over, beginning with an observed object and distilling it into a form with surreal or symbolic undertones.  Matt Bollinger's surfaces accumulate painted marks that evolve into animation; their lush textures filter the events of a single day.

Often it is a small but specific detail that grounds us in the artist's world and in turn allows us to glean universal insights.  Todd Bienvenu focuses on the minutia of his life - a jar of pills in the palm of a hand, the gesture of a woman drying her hair with a towel.  Sharon Madanes shows us the familiar ritual of handwashing, a ubiquitous act in the medical institutional settings in which she works.  Sangram Majumdar's figures in motion originate in observations of his infant daughter's first steps but simultaneously speak to ancient and contemporary sculpture or street sign iconography. Nina Bellucci uses simple strokes to convey the sheer delight of observing mundane objects bathed in the glorious sunlight of her studio. Here, the literal notation of time on a fluorescent pink sticky note serves both as a technical reminder for the timing of the painting while also offering a symbolic marker of how quickly the light can change.

Tirtzah Bassel is an Israeli artist based in New York. Her drawings, paintings and site-responsive installations explore the relationships between power and space, and the permeable borders between public and private domains. Recent exhibition venues Paper Positions Berlin (Germany), Kunstverein Worms (Germany), Ortega y Gasset Projects (Brooklyn), Volta NY, FOR-SITE Foundation (California), BRIC Arts Media Center (Brooklyn), The Visual Arts Center (New Jersey), Open Source Gallery (Brooklyn) and Volta Basel (Switzerland). Her work has appeared in Frieze Magazine, Hyperallergic, The Boston Globe, KQED, San Francisco Chronicle, The Art Newspaper, Huffington Post and Arts in Bushwick, among others. Bassel holds an MFA from Boston University and she studied drawing and painting at the Jerusalem Studio School in Israel. She is a faculty member in the Visual and Critical Studies Department at the School of Visual Arts in New York City and a resident artist in the Chashama Workspace Program in Sunset Park, Brooklyn. She is represented by Slag Gallery in Brooklyn and Galerie Thomas Fuchs in Stuttgart, Germany.

Nina Bellucci was born and raised in Largo, Florida.  She moved to Massachusetts in 2006 to attend Boston University and graduated with an MFA in Painting in 2009.  Bellucci has since been the recipient of numerous nominations and awards, including a 2018 Massachusetts Cultural Council Artist Grant in Painting and a winter residency at Room83Spring gallery (2017). Her work has been exhibited nationally, most recently at Basement Projects in L.A., at Site: Brooklyn in Painting the 21st Century, and in a two-person show, Material, at Pleat Gallery.  She maintains a studio at Waltham Mills Artist Association and lives in Newton, MA with her husband and two children.

Matt Bollinger, born in 1980, received his MFA in painting from the Rhode Island School of Design and his BFA in painting and creative writing from the Kansas City Art Institute.  His work has been shown in solo exhibitions in New York, Paris, and elsewhere.  Awards include first- and second-year fellowships at the Fine Arts Work Center, a fellowship in painting from NYFA, and a residency at the Sharpe-Walentas Studio Program. He is represented by Zürcher Gallery and lives and works in the Hudson Valley.

Dawn Clements was born in Woburn, Massachusetts and lived in Brooklyn.  Clements’ work was exhibited in the Whitney Biennial 2010 and is included in the permanent collections of the Museum of Modern Art (NYC), Whitney Museum of American Art (NYC), The Tang Museum (Saratoga Springs, NY), The Deutsche Bank Collection, The Saatchi Collection (London), The Henry Art Gallery, University of Washington (Seattle, WA), and Colecção Madeira Corporate Services (Portugal).  Her work is represented by Pierogi gallery.

Josephine Halvorson grew up on Cape Cod, where she first studied art on the beaches of Provincetown and with Barnet Rubenstein at the School of the Museum of Fine Arts, Boston. She attended The Cooper Union School of Art (BFA, 2003), Yale Norfolk (2002), and continued her interdisciplinary education at Columbia University’s School of the Arts (MFA, 2007). Halvorson has been awarded a Fulbright Fellowship to Austria (2003-4); a Harriet Hale Woolley Scholarship at the Fondation des États-Unis, Paris (2007-8); Moly-Sabata in Sablons, France (2014, 2017); the Robert Rauschenberg Foundation in Captiva, Florida (2016); and the Rome Prize at the French Academy at the Villa Medici, Rome, Italy (2014-2015).  Halvorson’s work has been exhibited widely including at Southeastern Center for Contemporary Art in Winston-Salem, NC (2015), Storm King Art Center (2016). In 2016 Halvorson joined Boston University as Professor of Art and Chair of Graduate Studies in Painting.  She lives and works in Western Massachusetts.

Sharon Horvath grew up in Cleveland, Ohio and moved to NYC when she was 17.  There she received her BFA from Cooper Union, then an MFA from the Tyler School of Art, Temple University in Philadelphia and Rome, and also attended Skowhegan School of Painting and Sculpture.  Horvath’s awards include a Fulbright Research Fellowship to India, a Guggenheim Fellowship, the Rome Prize, an Anonymous was a Woman Award, an American Academy of Arts and Letters Award for Painting, two Pollock-Krasner Foundation Grants, and a Prize for Painting from the National Academy Museum. Horvath is an Academician of the National Academy Museum and Professor of Art in Painting and Drawing at Purchase College, SUNY.  Her work is included in the collections of the Arkansas Art Center (AR), the Cleveland Museum of Art (OH), the Frost Art Museum (FL), the National Academy of Design Museum (NY), and the Utah Museum of Fine Arts (UT).

EJ Hauser lives and works in New York City and has exhibited extensively at venues such as Derek Eller Gallery, Regina Rex, Sperone Westwater, White Columns, Participant Inc, Gavin Brown’s Enterprise, Cheim & Read, The Journal Gallery, AWHRHWAR, The Breeder, The Contemporary Art Museum, Raleigh, NC and Wayne State University, Detroit, MI.  Hauser has lectured and taught at Hunter College, Mt. Holyoke, PAFA, NYSS, and BHQFU.  In 2013 she was a recipient of the Rema Hort Mann Foundation Grant and an Artist in Residence at The University of Tennessee, Knoxville.

Sharon Madanes lives and works in New York.  She received her BA in painting from Yale University, completed her MFA at Hunter College in 2014, and attended the Skowhegan School of Painting and Sculpture in 2014.  Her work has most recently been exhibited in NYC at The Drawing Center, 1969 Gallery, Next to Nothing, DC Moore, Cuevas and Tillleard Projects, and Underdonk; The Dot Project (London); Vox Populi (Philadelphia, PA); TSA (Los Angeles, CA); The Torrance Art Museum (Torrance, CA); and 1708 Gallery (Richmond, VA). She co-directs 14x48, a public art organization that exhibits the work of emerging artists on vacant billboards across New York.

Born in the former Soviet Union, Leeza Meksin is a New York-based interdisciplinary artist working in painting, installation, public art and multiples. Meksin has created site-specific installations for The Brooklyn Academy of Music (BAM), Brooklyn (2018-19), The National Academy of Design, NYC (2018), The Lenfest Center for the Arts, NYC (2017), The Utah Museum of Contemporary Art in Salt Lake City (2016), The Kitchen, NYC (2015), BRIC Media Arts, Brooklyn (2015), Brandeis University (2014), and an NEA funded project for Artspace in New Haven, CT (2012). She is the recipient of the Rema Hort Mann Emerging Artist grant (2015) and co-founder of Ortega y Gasset Projects, an artist-run gallery and curatorial collective in Brooklyn, NY.  Meksin is a faculty member at Columbia University School of the Arts where she serves as the Director of New Genres and the Director of Graduate Studies in the Visual Arts Program.  Meksin is currently working on a large-scale commission for the de Cordova Sculpture Park and Museum for 2019-2020.

Title: The Practice of Everyday Life